This weekend was General Conference, or as I like to call it, Jammie Church.  For those who are not familiar with our church, every six months, there is a world-wide conference.  We gather in the conference center, church buildings and around TV and internet connections around the world.  Since we are fortunate enough to have the internet access, we move the computer to the family room, get snacks, and listen to our prophet and other general authorities counsel.  It's always a wonderful, uplifting experience.  Then last night, as I was on my home from picking up Joseph, we saw a rainbow.  It looked like it ended right at our home.  I've got a wonderful pot of gold, right here. 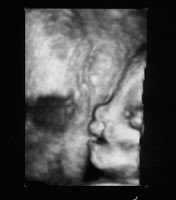 As I sat there, I couldn't help look back to my experiences during previous conferences.  Two years ago, I was making Aaron's blanket, and trying not to cry.  Hoping that I would get to use it with him for more than just one time. 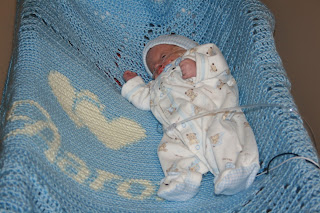 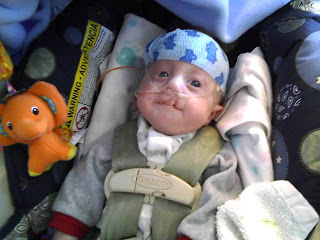 The next October found us at home on Saturday, but taking him in Saturday evening because he was using too much oxygen again.  So Sunday, Aaron and I watched from Primary's, and I dozed because we hadn't even gotten to our room until after 2:30 a.m.


Then last April, we actually made it all the way through conference, but our nurse had been sick on Saturday night, so I pulled the all-nighter and was completely worthless on Sunday.  Thank goodness for conference archives.  Aaron had his "wheels" by then, and I got a fun picture of him watching in the family room with us.


This October was our best one yet.  We were missing Mary, but I can tell from her facebook updates that she was enjoying it at college.  And everyone else was here.  We overdosed on sugar, but I'm hoping that it leaves a sweet taste in the kids' hearts and minds when they think back on it.  President Monson announced six new temples, including rebuilding the Provo Tabernacle as a second Provo Temple.  I couldn't be more thrilled!  I have so many wonderful memories of that beautiful building.  Along with many, many others, I was heartsick last January when I woke to the news that it had burned in the night.

Aaron especially enjoyed the music.  He loves to wave his hand and lead the music.  I got a little cute video of him, but realized later I was holding the camera sideways, so you'd have to tilt your head to watch it.  Oops.

I was a little concerned about Aaron this morning.  He was having a hard time keeping his sats up, even when I turned up the oxygen.  I decided that he was just going to have to listen to conference from his room.  Then I realized that he was on the pediatric flow meter.  That one only goes up to 3/4 of a liter.  So instead of doing poorly, he was actually doing very well!


Also, as I was looking at him, I came to a conclusion that William (and I think others) had already realized. Aaron's bed was too small for him.  Just lying there, both his hands were out on each side of his bed.  And although if I'd taken out his toys, it was still long enough for him.  With them in, it was getting too short.  So, big brothers to the rescue.  David and Jonathan pulled the crib out of the basement and Jonathan put it together for me.  Now he's got lots of wiggle room, and he seems more comfortable, too. 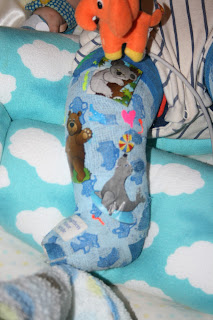 I realized that I hadn't taken pictures of Aaron's casts since they were decorated.  Even with the fiberglass, he's trying to move a lot.  Because we had to crack them, they're now wrapped with Coban.  They gave us some cute wrap with cars on it.   But Michael still wanted to decorate them anyway.  So we put some stickers and paint on them, just like before.  It will be so funny to see what he does in three weeks when he no longer has casts.  These are so heavy!  But he keeps on moving them.  He's getting the best ab work-out.  I know it is helping his posture to be able to build up those core muscles so much. 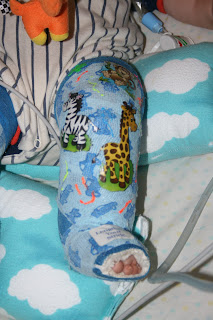 I've put "Lengthen You Stride" stickers on his toes each time.  More of a reminder to me than to him.  He has caused me to lengthen my stride so much over the past two years.  Two years ago, my pregnancy was just starting out.  I was pretty much just going through life.  I had no idea the journey it would take me on.  I have known more pain, but also more joy than I knew was possible.  I have come to know my Lord and my Redeemer and depend on Him for my every thing.  He is always there.

Be strong and of a good courage, fear not, nor be afraid of them: for the Lord thy God, he it is that doth go with thee; he will not fail thee, nor forsake thee.    Deuteronomy 31:6
Posted by CompatibleWithJoy at 9:29 PM