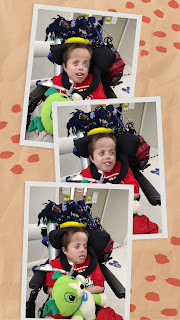 In English: there was a hole between his artery and vein in his right groin area.  Not a great thing.  When the surgeon got in there, he said it was the size of a pencil eraser.  On a kiddo Aaron's size, that's huge!  But no more!  So all that lovely oxygenated blood that was pulling a U-turn and going back to the heart instead of delivering precious oxygen to the cells in his leg has now been put on notice.  The U-turn has been removed.

Already his right foot is much warmer than I remember it being.  And we're hoping that it improves his heart health, or at least slows the progression of his heart disease.  Poor muscle was totally being overworked.  It still is, just hopefully not as much.

We were hoping to go home today.  We actually thought we would.  And the "we" is apparently the doctors and I.  When I told William it wouldn't be happening, he laughed and said, "I never thought you'd be home today."  Oh well...

But this kid is a champ.  He's rocking out, playing, watching TV.  But that darn asthma has decided it wants to play, too.  He spent most of the night on ten liters.  That wouldn't be too far off except that since we switched ventilators he usually needs two to four liters.  Sigh...

In other news, the new Primary Children's campus in Lehi is really coming along!  Some of us got to take a tour of it on Thursday and it was AMAZING!!  There is a complete behavioral health unit, which means that among other things, when a child needs both medical and behavioral health care, it can happen there.  Right now, inpatient behavioral health does not have the option of supporting medical complexity, too.  It will be quite a bit smaller than the original campus, about a third of the size but it will have a PICU, a NICU, regular floor, ORs, emergency department, and observational rooms.  Plus there's a full wing with clinical offices as well.

Going through and actually seeing what we spent so much time working to design was thrilling!  Still a ways out from opening, it will be a great blessing to so many children and families.

School for me is going well, but man, it's HARD!!  Everyone says the third semester is the hardest and I believe them.  There is just so much to digest and figure out.  There's a lot of self-introspection and work between my ears going on.  Plus we're getting ready for our capstone projects and that's got me totally stressed.  But that's okay.  I'm also learning to set boundaries, including on my own thought processes and to take care of myself. 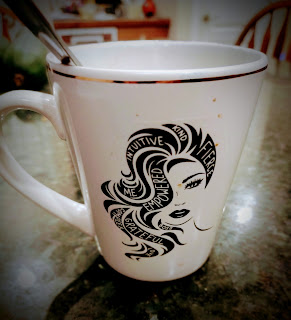 When we first started and they were talking about self-care, I was like, yeah, that's totally a good idea.  Then we were asked what we were doing for self-care.  That one threw me.  I was like, I have no idea.  I have no time.  Self-care?  You've got to be kidding.

But I'm learning.  It's deciding that good enough is just that:  good enough.  It's lighting a candle while studying and listening to calming music.  It's deciding that it's okay to not do some things, and it's also okay to say I can't deal with mess and clutter and get it cleaned up instead of doing something else.  Self-care is acknowledging that my own mental, physical, emotional and spiritual health is important and I need to be the one to care for it.

Sometimes (although perhaps not for a while now, it's cold) it's sitting outside in the sun and just listening to the breeze and neighbor kids playing. 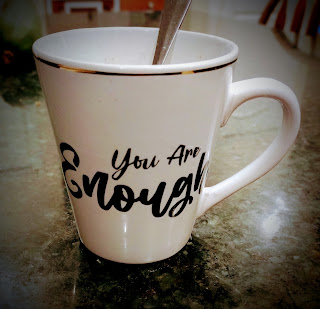 Recently it was suggested that self-care is scheduled, sacred time.  I've been believing that I don't have time to write, or that what I want to write won't make sense.  That needs to not be a problem for me.  If my writing is my self-care, it doesn't matter if others understand.

I've written therapy-type posts before.  Not therapy for others, posts that get the thoughts and whatever out of my own brain.  Therapy for me.  Maybe there will be more of those.  I need to schedule time for this, for me.  I think everyone in my life will benefit, but again, this is mostly for me.  And that's okay.

"Self-care is obtaining and maintaining your own well-being."
Dr. Elijah Nielson

Posted by CompatibleWithJoy at 10:02 PM No comments:

GI Issues and The Plague (Covid): What a Month

It's been an interesting month around here.

Yeah, "interesting" is probably a good word for it.

When last we left our hero, he hurt, he hurt a lot.  And the cycle continued.  We would have three to four pretty good days, an excellent day, and then hell would break loose again.

He would start by grabbing at his belly, pulling at the g-tube.  Then writhing and grimacing.  Followed by crying, screaming, fevers and often a river of brown stuff from his bum.  We would have to stop his food, do pedialyte for 24 hours, and then start again.

Consulting with his special needs ped, we put him on a very, very bland diet.  Think BRATT.  Tried that for a week and it went well!  So I reintroduced something.  I can't even remember what.  Nope, didn't work.

So now he gets bone broth, white rice (brown caused issues), a bit of tofu, banana, white potato, and some oil, salt, and blackstrap molasses.  And it seems to not hurt.  But at the same time, he's still experiencing diarrhea and has been for about six weeks.

The good news is he no longer storms.  He's not crying.  But I am worried about nutrition.  I discussed this with the Dr. M. and we've decided that for now, we're going to stay the course.  It's not optimal, but he's in a decent spot and he's got surgery to fix the hole between his artery and vein in his groin area this Friday.  No one wants that derailed...  Plus we have an appointment to see GI about this whole mess the beginning of November.  The thought is that it's better to not muddy the waters at this point.  So there's that.

And then the plague hit the house.  I brought it somehow from somewhere.  I know it manifests differently for different people.  I'm just not sure why I was the lucky one who was (and still kinda am) totally miserable.  I got to the point where even swallowing ice water was painful and tricky.  I've been cleared for over a week now but the exhaustion and sometimes dizziness is persisting.  I do okay, and then not so much.  Although I have progressed from where even showering was enough to put me back in bed.

William on the other hand felt like it was a cold.  Michael is still wishing that the ankle he sprained a few days before getting sick would get better.  Yeah, they got off pretty light.

The good news is that Aaron didn't get it.  My nurses stepped up big time, especially his one school nurse.  They filled in any gaps they could so we did almost nothing with Aaron while symptomatic.  So very grateful for their help!!

So that's our month in a nutshell.  I'm grateful most of the illness was over fall break when I didn't have much to do for school.  Having Michael out at the same time meant that we weren't getting up at 5:30.  But frankly, it was miserable, and I'm glad it's (mostly) over.

Friday he is having surgery.  It should be fairly straightforward.  Should be.  They'll keep him at least overnight due to his pulmonary hypertension and anesthesia not playing nice together anymore.  Fingers crossed that we're home on Saturday, or Sunday at the latest.  And here's hoping that it does take a load off his heart like it's supposed to.

But for now, good days are outnumbering the bad by about 10 to 1. Blessings...

Every good gift and every perfect gift is from above,
and cometh down from the Father of lights...
James 1:17
Posted by CompatibleWithJoy at 2:15 PM No comments: