Friday, October 07, 2011
8:30 a.m.  Aaron’s fever came back once the Motrin wore off, and again after we gave it and it wore off again.  He had a rough night in that he would drop his sats and need more O2, especially when filling his diaper, but no more seizure-type activity.  Do we call it febrile seizures?  I don’t know.  The RT from the emergency department on Wednesday stopped in this morning.  He also noticed the eye movement twitching down in the ED.  I hadn’t.  So he’s higher on his oxygen, and a little thicker in the secretions, etc., so something’s going on.  But I don’t think we’ll stick around in the ICU much longer.  I suspect they’ll ship us to the floor this morning.  Not sure what will happen from there.

I had two friends come visit yesterday.  It was so nice to see them.  Stephanie I met through the Moms of Special Spirits group.  Her daughter has some issues with her 18th chromosome as well, but it’s not a full trisomy.  Then Tracy also came up.  Her little one had full T18 but has now been healed.  She grew her angel wings in May.  I can’t imagine how hard it must have been for her to be back in here where Alayna passed away.  I’m so grateful for the time I was able to chat with these friends.  We all travel different roads, but we can still be there to life and comfort each other along the way. 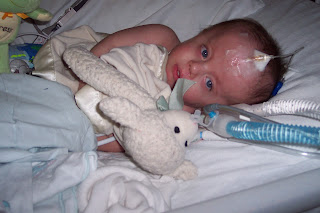 Laughing in the PICU?  This morning I met a mom who’s been here for a month now.  Her baby (not really a baby, but a child in the PICU is always our baby), has Down’s and leukemia.  Last night was the first night she didn’t sleep bedside.  Her nurse insisted she sleep elsewhere so she could sleep well.  Side note: it’s NEVER dark OR quiet in the PICU.  They can turn lights down and people aren’t generally loud, but the nature of needing constant care means that lights are always on, and the machines make noise.  So they sent her up to the fourth floor last night to sleep.  The fourth floor!  We both started laughing at this, because it seems so silly.  But she felt like she was FOREVER away.  And I totally got it.  Which made us laugh even more! 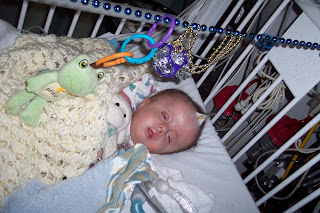 The charge nurse came around last night and asked if I was sleeping bedside or if I needed a room.  I told her bedside, and I was ready with all the reasons if she persisted.  I’m sure it’s not quality sleep in here, but there’s also a peace of mind being bedside.  If something happens, and it often does, you’re right there.  You know what’s going on.  And nobody has to come get you.  I can wake up, notice they’re at his side, register the alarms, and choose whether to get up, just ask what’s happening, or simply ignore it and roll over.  Sleeping somewhere else, you don’t get those choices.  So, when she came back and the nurse asked if she’d slept well, she said, NO!  She kept waking up and wondering what was happening.  Waiting until she could reasonably come back downstairs and in.  I remember when Aaron was first trached, I actually slept much better here with the lights and noise than in my own bed.  There’s a comfort, a big comfort in knowing that there’s a whole team of competent, caring medical professionals right there, ready to help.  It’s crazy the way things like sleep can get turned upside down.
1:00 p.m.  We’re heading up to the floor as soon as they get everything squared away, so in the next few hours or so, probably.  Hospital time, you know…  Anyway, it looks like one of his cultures is growing out for rhinovirus.  Yep, the good ol’ common cold.  He’s still running a fever and using too much O2, but I’m comfortable with the idea of going up there since he hasn’t done anything weird for more than 24 hours.  I think the consensus may be that he just had too many stressors going.  He was constipated, and it wasn’t going to resolve on it’s on, but what we had to do wasn’t fun at all for him.  And it looks like maybe he had a cold starting.  And who knows what else.  But all together it could have lowered his seizure threshold and caused him to tip over when the temperature started going up.
So if it starts up again, the main thing will be to support his oxygen needs and watch his heart rate.  Make sure he’s comfortable because sometimes people vomit, and he can’t without having his tummy vented.  And then, if it lasts more than about five to ten minutes, we need to think about 911 because he may need some help to stop seizing.  I’m voting for all this knowledge to just stay academic and not become something I have to put into practice.
It's funny how obvious it's the beginning of the year for the med students as well. They're a bit hestiant and wide-eyed. There's an innocence about them and they move in packs. And they're facinated by Aaron. I figure for every one that he interacts with and plays with, that can be another family that can have a more positive experience later on. Even if their child can't sustain life, there can still be compassion and hope, because the doctor will remember that they once saw a miracle.
Posted by CompatibleWithJoy at 1:29 PM