On Tuesday, Aaron had an evaluation for preschool, to see if he qualifies, you know.   Really more to get an idea of how much he needs in the way of services, 'cause if you're only about six months old or so developmentally, and you're nearly three years chronologically , yeah, you can call that delayed development.

Most of it really was a "can he do this" or "has he done that" kind of a thing.  But then when the speech/language specialist came in, things got interesting.  She asked if he could recognize objects on a page.  Um,  I don't know, I don't think so.   Well, let's see.

She gets out a book with three to four color pictures on a page and shows it to him.  "Where's the bird?"  Just as I get ready to say, "I don't think he knows what a bird is," (he's rarely outside other than being moved in and out of a car),  HE LOOKS AT THE BIRD!!  RIGHT AT IT!!!

Then she asks him to find the ball on the same page.  Found it!  And on and on we go.

Finally, after eight to ten images, and getting every single one, she shows him a page of a child playing with blocks, bathing, and sleeping.  She asked him to find the child washing.  He kind of looked at all of the pictures but not really focused in on any of them.  I told her that most of his baths are bed baths, so it's probably not something he recognizes.  Then she asked him to find the sleeping child.  Again, he really didn't engage.  So I asked him to find who was "night-night."  Bingo!  Right at the baby sleeping.

This kid can learn, and does learn!  We just need to find the key to unlock the safe.

In other news, he also had labs done on Friday.   We've been adjusting his PEEP settings on his ventilator and needed to check that it was going well.  He's been on a PEEP of 10 (crazy high) for two and a half years.  We dropped it to 9, and then two weeks ago to 8.  Before going further, we needed to know that he was still getting the support he needs to ventilate well.  Yep, so tomorrow, we'll try 7 and see how that goes.  It may not sound like a big deal, but believe me, it's huge.  IF he can keep this up, we've got a real fighting chance of being able to get off the vent.  It won't happen today or tomorrow, or even next month.  But that's okay.  I'm in this for the long haul.  It's a marathon we're running here, not a sprint.

So all in all, a pretty good week for Mr. Aaron.  And the month of May is winding down, which means perhaps I'll catch my breath.  School is almost out, the sun is shining, and life is good.


“The central struggle of parenthood is to let our hopes for our children outweigh our fears.”
~ Ellen Goodman

Posted by CompatibleWithJoy at 9:03 AM 3 comments:

You Know You're a Special Needs Mom When... 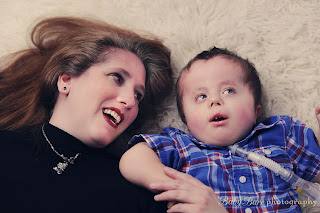 Back when Aaron was still tiny, and I was still frantically trying to keep him from dying, a mom posted something that made me relax.  She said, "you know you're a special needs mom when you put the stuffed animals to work."  She was using the stuffed animals to hold the blow-by oxygen that her daughter needed. That's when I realized that this could be doable, livable, and even fun.

Recently, another friend posted a "you know you're a special needs mom when..." and asked us to respond.  I laughed and laughed.  Mostly because I recognized myself in so many of these!  I hope you enjoy them, too.  But please, if you don't have a special needs child, don't feel sorry for us.  This journey, while none of us planned on it, has proved to be a refining and growing process that could not happen any other way.  So here goes:

You know you're a special needs mom when:

Special thanks to all my mommy friends on Utah Kids.  When this went up a few weeks ago, I laughed until I cried, and then sometimes I cried, too.  You ladies give me so much strength.  I know I'm missing a few in here, please forgive me.  My computer was being funny as I tried to copy and paste, but I think you get the gist of this.  We're not given special kids because we're special.  We're just ordinary women being asked to parent extraordinary children.