I lied when I told the paramedics we wouldn’t see them.  Last night was really short on sleep as the nurse woke me every 1-2 hours.  I’d come out, we’d discuss things, make some changes, and then I’d go back to bed hoping to sleep the rest of the night.  By 5:00 a.m. we needed to be done playing games.


Over the last 48 hours we’ve had increased secretions, with some yellow color in them.  He’s been a little higher overall on his oxygen, but not by a whole lot.  He usually sits  around 1 to 1 ½ liters and he’s been more on 2 and sometimes 3.  During the night he went up to 5.  Also, about 2:00 a.m. on Saturday morning, he had a big desat, down to the high 60’s and took a while to come back, about 30 minutes before he was back in the 90’s and another 15 minutes to bring his oxygen back down.  About 12 hours later, about 2:00 p.m. on Friday, he did something similar, but into the low 70’s and not as long to come back up.  Both times he was gagging and choking and retching.
Last night’s 8:00 p.m. bolus feed went just fine.  No problems or issues.  He’s supposed to start continuous night-time feeds at 10 p.m. at a much slower rate than his daily bolus feeds.  We started them, and he quickly let us know that it was not a happy thing.  He started gagging and retching and had a really hard time with them.  We stopped for a time and tried to restart.  Then we tried going at half-rate.  Then 15 minutes on and 45 minutes off.  By this time, I really just wanted to be able to get something in him.  That didn’t work either.  So when the nurse came for me the third time at 4:30, I spent some time thinking and looking at everything.  He was quite a bit higher on his oxygen, but was still within our ability to support.  But he was also working much harder to breathe.  And I hadn’t been able to keep anything in him since 10 p.m.  I knew it if he started getting really dehydrated, it would be much, much worse. 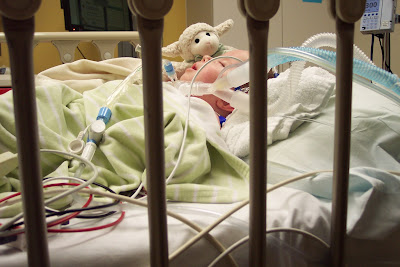 Transportation went pretty well, until he started throwing up again.  He dropped his sat rate and we had to go higher on his oxygen just before we got here.  We actually came most of the way on 3 liters (thanks to his DOSE – Daddy Oxygen Stimulation Enhancer – rocking time with Dad before we left), but then hit 4 and then 6.  When we went to 6, he told the driver to speed it up, but we were turning into the hospital by then.
Side note:  For those who may not be familiar, Aaron does his very best on Daddy’s shoulder.  Those two have a really special bond.  So when he’s struggling and we need an ambulance, Daddy holds him and he’s usually looking okay by the time they get here.
He’s still pretty miserable, but hasn’t thrown up since about 11 a.m.  He’s started in on a low-grade fever, and we’re treating that and his discomfort with Tylenol.  He’s on the hospital ventilator at 80-100% oxygen.  We can’t get him below 80% right now.  His abdominal x-ray came back negative, but his chest x-ray has a large pocket of atelectasis, or collapsed lung in the upper right lobe.  And, as far as I know, we’re still waiting on all his labs.  So I don’t know how long this will take.  He may surprise us all and get out in a day or two, or this may just be the beginning.  But I’m not holding out too much hope for getting these casts off tomorrow.  Oh, well.
Posted by CompatibleWithJoy at 6:29 PM