This week's been busy (like I haven't had a busy one in the last two years?) and also a bit rough.  We celebrated Monday by going for flu shots (fun!).  Yeah, it's that time of year.  The sign is going up tomorrow.  It's the one that says, "Help protect Aaron.  If you haven't had a flu shot, please don't come in.  If you are sick, think you might be getting sick, or been around anyone sick, please come another time!"  We were also nurse-less on Sunday night because our nurse had a sick kid.  I'm serious about this.  NO ONE SICK!

Then on Tuesday, Aaron had physical therapy.  It's been quite a while, because he kept timing his hospital stays to interfere with his appointments.  His therapist brought out an iPad for him to play with during her visit.  He LOVED it.  He had a lot of fun playing the "piano" on it and watching the shapes move and listening to the sounds.  Tuesday was a good day.

Wednesday found us back up at the hospital.  Because of his ventilator, he had to be put under general anesthesia for his MRI.  Somehow, we didn't think it a good idea to try to go an hour without breathing assistance, and his vent definitely has metal on it.  But, he tolerated it really well and woke up quickly afterwards.  The only hard time was when he got cold.  It took a little bit for us to figure that out but once we did, he was fine!  He's definitely my kid.  For those who don't know me that well, William decreed years ago that I needed to take a jacket with me, even in July in Phoenix.  It's not quite that bad, but I do get cold easily.

Thursday was another hearing aid check-up.  We had some interesting results.  R. did a bone conduction test where the pads are put right on the skull just behind the ear.  I couldn't hear much of it, but I could certainly tell when he did!  You know that sad, scared baby face that just breaks your heart?  Yep, he didn't like it much at all.  It was easy to tell that it was different and unfamiliar to him, and just downright scary!  I felt so bad for my baby, but it was important that we could get the test done.  We also did a traditional sound booth test where there are sounds broadcast from different corners and we look for reaction.  While the bone conduction was obvious, the other one was not.  We really couldn't see much change at all.  So it looks like most of his hearing loss is conductive, or getting the sound from the outside into the brain.  And that also helps explain why he loves to lay his head on Daddy's shoulder while he sings to him.


So, other than busy, what's so rough about this week?  And why is he an overachiever?  Yeah, I'm getting there, trying to put it off.  Yesterday, I got the call from Dr. M in special needs regarding his EEG and MRI.  His EEG was largely "unremarkable".  He's got abnormal patterns in his brain, but they're consistent with his syndrome.  The MRI, well, not so much.  The only thing we have to compare it to is a brain ultrasound from the NICU, 16 months ago, but there have been changes. 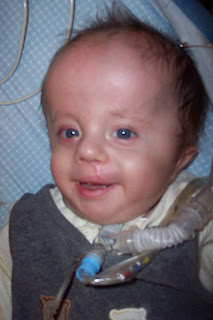 His ventricles, the fluid-filled pockets in his brain, are increasing, probably due to the fact that his brain tissue has atrophied some.  He also has a subdural hematoma near the base of his skull.  This often happens when there is some sort of trauma, but we know he hasn't had any.  (Now if it was one of the others, good chance!  Those heads always seem to be being knocked around!)  It's possible that the bridging veins in his skull, those that connect the brain to the skull, have been stretched some as the brain has shrunk and that has caused the bleeding.  But really, we don't know what's going on or why.  Dr. M confessed to being completely stumped.

So, apparently, my little guy, not content with his 11 specialists (plus 4 therapists) has decided to make it an even dozen.  And we can't just add in neurology (although I may be wrong and we may have them involved, too), we have to go to neurosurgery.  I used to work for a neurosurgeon, back in a different lifetime (the BC era, before children).  I know what they do.  They cut on people.  Surgery, you know.  I'm tired of cutting on my baby.

So I've been a bit brittle lately.  Two hospital stays and some uncertain results can do that to you.   So, if you see me, and you don't want to deal with it, I understand.  Just please don't look beneath the shell.  My shell is a good thing  I discovered it a year and a half ago.  It's a hard covering I put on to face the world.  It's what lets me laugh when inside, I'm crying.  It protects you, and it protects me. It's warm and safe inside and I can hide until I figure out how to deal with things again.  I wrap it around me like a blanket, and just let my nose poke out, kind of like a turtle.  I don't stay inside forever, only until I feel strong again.  I just want it to all turn out okay.  I know in the end, it will.  But that end, it's a long, long, long way away.  And sometimes, it's just hard.

Posted by CompatibleWithJoy at 8:11 PM