Okay, it has been a crazy week around here.  As you know, Aaron came home on Tuesday from his "same-day" surgery on Friday.  When he was discharged, his heart rate and oxygen usage was still quite high for him, but we'd done everything we could for him at the hospital and it was time to come home.

As time has gone on, he's done a little better each day.  Finally, last night, I think we could finally say he was back to his baseline heart rate, and close on his oxygen.  But I still grounded him.  He LOVES to get out.  When we put him in his car seat or stroller, you can just see the joy on his face.  But I decided we just can't take any more chances and he's just going to be at home until his 15 month check-up on Wednesday.  So he and Daddy stayed home from church together today.

I was asked to share some thoughts with the Laurels (16 & 17 year old girls) in church today about the worth of souls.  I was so grateful for the opportunity to talk with them.  The lead-in was about how we lived before our birth in heaven.  I started by telling them about deciding we were supposed to have another baby.  The impression was so strong that I wondered if I would need to be able to draw on that memory.  Of course, I learned later that I would.  Then I spoke about how peaceful and uplifting it was to be with Aaron in the NICU.  The veil between this world and the next is so thin there.  There are so many precious spirits coming too soon, and some leaving too soon and the staff seemed to recognize that there was a unique privilege in being able to minister to these little angels.  I know that hasn't been the experience in so many places, but we were blessed that it was for us.  I think, perhaps, the reason it is so easy to see the light of heaven in Aaron's eyes, is that he has to work so hard to stay here, just to sustain his life.  And I am grateful that he is willing to do so.  He has taught me so much, and influenced so many lives, even as fragile as he is. 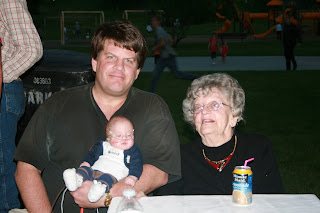 On Monday, William's grandmother, affectionately known as "Muttie" to so many, passed away.  She was almost 98 and had lived a long and full life.  All of William's siblings came in from out of town, most with their families.  After the viewing on Thursday evening, several came back to our house for snacks and to practice music for the funeral.  Then Friday was another viewing, the funeral, the burial, and a family dinner.  And then everyone over again.  And Saturday we had a crazy game time for a few hours before people started leaving. All in all, I told someone that I hoped Muttie was having as much fun at her party as we were having this weekend.  I'm sure she was. 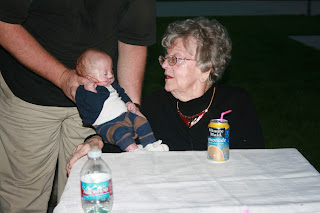 Muttie was a remarkable woman.  I remember she would often tell me that I was doing a Marvelous job with my children.  That was her word for me.  And when she liked something it was "Vundebar".  She was at baptisms and blessings for as long as she could.  She even traveled to San Diego for baptisms until she became too frail.

Of course, the week wouldn't be complete without some excitement.  Friday, Aaron was still higher on his oxygen than I wished for, so I asked a nurse to go along with us.  We took his oxygen concentrator and his electrical cords along with us and plugged him in during the viewing in a classroom off to the side.  He had a marvelous time waving and smiling at people as they came in the door.  Then at the cemetery, Jessica stayed in the car with him so we didn't have to try to get him out again.  But that wasn't the exciting part.  I have a car charger for the ventilator.  It's supposed to work.  Notice the word "supposed".  Yeah, that was not the day to discover that it wasn't.  By the time we were having dinner, I noticed that we were getting low on battery, so we headed out and were soon on our way.

BYU was having a Friday night game as well, so traffic on the I15 was pretty slow.  As we hit Point of the Mountain, (about 20 minutes from home with no traffic) we got a low battery warning.  That was not fun.  AND Aaron's oxygen tank decided that it was about out as well.  So Jessica crawled back to get another tank and grabbed his emergency go bag.  We got him switched over to the new tank and pulled out his ambu bag and got it ready for when the ventilator quit.  Now, we've bagged him before, but he really doesn't like it, and I wasn't looking forward to having to do it.  So William drove as fast as cars in front of him would allow, Jessica kept a close eye on him, and I kept silencing the "low battery" alarm so it wouldn't drive us all nuts, and prayed, prayed hard.  We're supposed to get about 20 minutes from the start of low battery until the ventilator quits.  It may be that we were getting a little power, and it may have been the power of prayer, but it was 35 minutes from the time the first alarms sounded until we pulled into the garage.  Five minutes out, I called home and told Jonathan to get a long extension cord, plug it in to wherever, and run it out along side of where we would park.  We pulled in, Jessica jumped out, and handed me the plug and we got him powered back up.  Much more excitement than I really thought I wanted.  But I am grateful that I would have been able  to help him.  I thought about calling 911, but we really would have been able to handle it without them.  It's just there was a lot of adrenaline running, too.

It was after that, I decided that Aaron was grounded.  But all in all, he's doing well.  We're even back to enjoying lots of big smiles.
Posted by CompatibleWithJoy at 8:13 PM