Casts and The End of the Pity Party 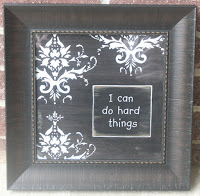 Okay, the pity party is over.  I wrote a big, long, whiny post yesterday, but then decided not to post it.  Yeah, it was really whiny.  Amazing what a back rub, a book read just because, an old friend stopping by, and meeting with a new friend can do for the blues.  See, I really try to stay positive, and most of the time, it works.  But sometimes, it is just hard, really hard.  But that's okay, 'cause I can do hard things.

Most kids Aaron's age are starting to walk and talk.  They may stagger, but that's why we call them toddlers.  And most of the time, I love to watch them and interact with them.  But sometimes, it grabs me that my baby won't do that, at least not in this life.  And frankly, lugging his equipment around all the time, well, it takes TIME.  Like today, I timed putting him in the car at the hospital.  13 minutes!  And that's from when I unlocked the car until I went around to get in the driver's seat.  Anyone who knows me, knows that it's a struggle to be slow.  I don't like slow.  So yesterday, well, it was tough.  And I had a pity party.  Reasonable?  Probably not.  Did it anyway?  Yep. 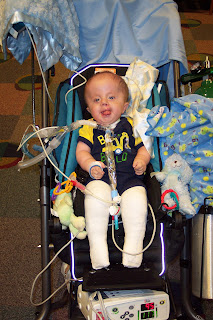 Today, however, was a new day.  You know the song from "Annie?"  "The Sun'll Come Out Tomorrow?"  Well, there wasn't much in the way of sunshine around here today, not literally.  In fact, this morning the radio was referring to the weather as a typical summer day, in Seattle.  But in my mind, it was much better.

This morning I went out for a run with Jonathan.  Now, my runs aren't much in the way of workouts for him.  But he's willing to go with me just to keep me company.  I'm looking forward to when I can run well enough that we can also talk at the same time.  He's really taking on quite the service project in being my running partner, and I appreciate it. 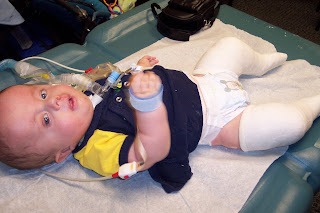 After that, I loaded up Aaron and we went up to Shriners Hospital to get his feet cast.  This time there was no trouble with it.  And it actually went quite quickly.  Now the little monkey has his pulse/ox probe on his hands instead of his feet.  I think he's enjoying it there, and he makes the monitor beep quite a bit because he's always waving his hands around.  Aaron is such a peaceful, patient soul.  His casts go all the way from his toes up to the top of his thighs.  And since the purpose of them is to reposition his feet, they aren't in his usual position.  I really don't think I would be very comfortable with that at all.  But Aaron, true to his nature, is just taking it all in stride. 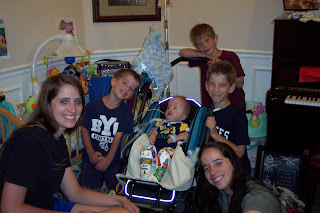 After Shriners, we went over to Primary's.  There is an 11-year-old girl with T18 who was having surgery today.  Her mom and I have been facebook friends for about a year now, and she was one who really helped me when Aaron was getting his trach.  It was so fun to meet them and to talk with Jennifer.  Elanor is going into 6th grade and is in a regular public school.  She even goes in with  the mainstream classes for part of the day.  Jennifer says she really enjoys interacting with the other kids.  I didn't even dream this might be possible, but maybe Aaron can do that, too.  I am so grateful for all these other moms who walk this way with me. 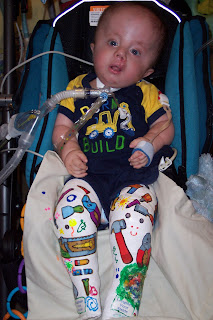 And then, as if things weren't going well enough, a dear friend stopped by to see how I was doing.  She brought flowers and peanut butter M&Ms to cheer me up.  Nothing says love like chocolate!  She did warn me about overdosing on them.   Oops....

William and the three oldest boys are at a scout camp all week, so tonight we had a small group for Family Home Evening.  The girls helped the younger boys make cookies and then we decorated Aaron's casts.  Plaster is much more moldable than fiberglass, so they are the plain white, old-fashioned, don't-get-wet casts.  Well, not anymore.  He's wearing a "Born to Build" outfit, so we took tool stickers and paint and decorated them all up.  I have to say, they're pretty colorful now. 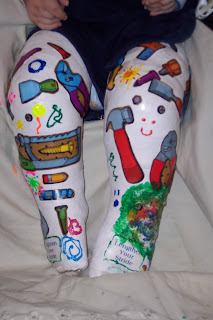 So, all in all, today has been a much brighter day than the past couple.  Even if the sun had a hard time shining, it was shining in my heart.
Posted by CompatibleWithJoy at 10:17 PM