First Day of School (for most!) 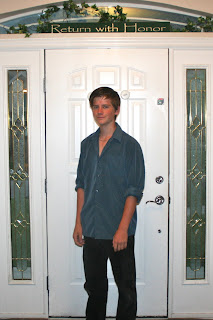 Okay, so it's the first day of school for just over half my kids.  How weird is that?  Deborah is looking for a job, Mary moves out tomorrow, Michael's kindergarten doesn't start until next week, and I get to keep Aaron at home with me. So only five out of the nine actually started school today. 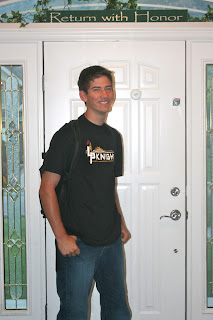 Anyway, it's still that First Day of School!  And we're off to a roaring start.  Another blessing of studying scriptures first thing in the morning, one that I haven't heard mentioned by the prophets, is that when the alarm clock doesn't go off right, or when you turn it off and go back to sleep (Mom!), there's still plenty of others to wake you.  And then we're still, basically, on time.  Yeah, only four of the ten of us managed to get up on our own.  I think we need to work on that. 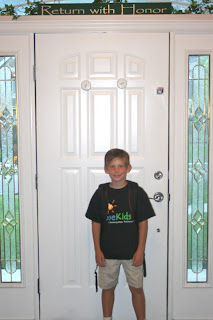 Again yesterday, I realized how different our "normal" has become.  We were at "Back-to-School" night and I was talking with the boys' teachers.  My concern, especially with the younger ones,
was that if they came to school talking about Aaron, that the teachers not think they were telling "stories."  If (NOT going to happen this year) they came and said a helicopter came to our house, it was probably the truth.  If they talked about Aaron having two bellybuttons, that was how we explained the g-tube to them.  The teachers were great about that, but were so very concerned about how difficult this was for all of us.  I tried to explain that the boys really do just roll with it.  We were admitted so many times last year that it was no longer unexpected.  Their biggest worry, even when it had been bad, was how long before Mom's back, and can we play in the playroom when we go up to visit. 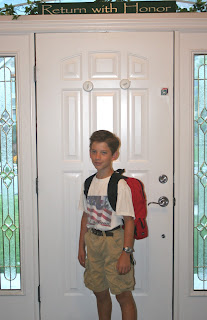 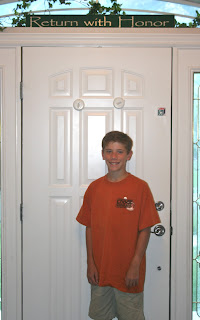 Last year I really had to fight to put a family password on my kids' check-out accounts.  We have it just in case Aaron takes a bad turn really fast.  Then I don't have to try to remember who has permission to check the kids out.  I can give anyone the family password and they can get them and bring them to the hospital.  This year, all the attendence people remembered me and were just fine with it.

I think the only base left to cover is the mass e-mail.  I still need to let my older kids' teachers know about Aaron.  Because even though the younger kids roll with just about everything, the older ones still stress a bit more.  The youngers have almost come to expect us to be gone frequently.  The olders know that the ambulance only comes when it's life-threatening.  So even though they also are familiar with it, if Aaron is not doing as well, they worry more.  Because the middle school and high school teachers are so used to hearing all sorts of excuses, I feel like I owe it to them and to my kids to give them a heads-up that they are also not telling "stories." 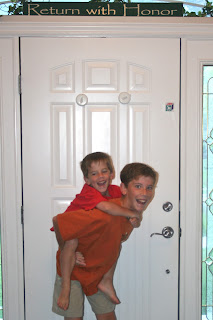 Our school district here only makes me fill out one emergency form per school instead of one per child like San Diego did.  I also no longer fill out any disclosure documents.  I figure by the time my kids are getting those, they know my name, address, telephone number and e-mail.  I make them fill out their paperwork and then I'll sign it.  But with all this other stuff, I still think I have more homework than they do that first week of school.  Wish me luck in getting this e-mail composed...
Posted by CompatibleWithJoy at 9:03 AM