I recently started running, or at least something like running.  See, all my life I was blessed with skinny genes.  When I carried my older kids, I was all baby and almost nothing else.  Now, I'm no baby and a lot of something else.  Anyway, after Aaron's first birthday, I actually started looking towards the future.  It's like I finally gave myself permission to look past the next week or two.  And I realized this could get interesting.

See, Aaron, in his stroller, and with all his equipment weighs somewhere between 125 and 130 pounds.  I know he's only about 15 of that, but he is getting bigger.  Then there's me, on the "other side" of 40 where I'm told I lose muscle mass.  So I decided that something had to change.

I found a program called "Couch Potato to 5K."  I looked at the first week and thought, actually this is really easy.  I bet I could just skip it.  But, since I'm trying to be a good girl, I thought I'd at least do the first run before I decided to skip to week two.  Weeeeell, um, yeah.  This couch potato has not only spouted roots, she's put them down deep.  There will be no skipping of steps on this one.  In fact, sometimes I hang onto a week for a few more runs before moving on.

Which brings me to this post.  Aaron is my inspiration for running.  Whenever I think I can't make it one more step, I think of him.  He's running a much harder race than I ever will and he doesn't get to stop after 20 or 30 minutes.  And he doesn't complain, ever.  He just keeps on keeping on, smiling almost all the time.  He's my hero.

On the way back, there's a pretty steep hill.  In my training plan, I now run up the hill.  It's not much of a run, but I keep doing it.  And as I do, I think of Aaron.  I've dubbed it Aaron's hill.  It's a narrow path through the trees, but at the top you can see the sky.  Depending on what time I go, it's been either baby blue, or like this morning, rosy pink.  It's darker down at the bottom, in the shade, but I can see the bright goal ahead of me.  And as I climb, I remember Aaron and all the others who inspire me.  They don't give up and neither will I. 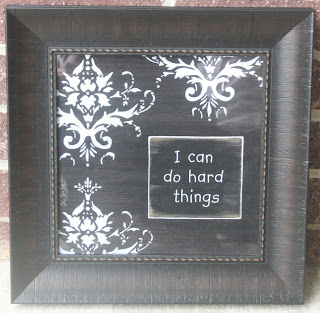 Today there were several children weighing on my mind.  As I ran, their names went through my mind over and over:  Aaron, Caleb, Peter, Emily, Brigid, Lane.  Aaron, Caleb, Peter, Emily, Brigid, Lane.  Somehow, it wasn't as hard as I thought it would be.  It was a better run than I've had in a long time.  Still hard?  Oh yeah.  But compared to what these kids are doing, not so much at all.  'Cause, I can do hard things.
Posted by CompatibleWithJoy at 9:42 AM