Cardiology plus a New Cousin! 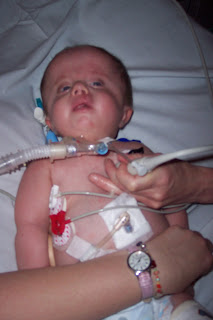 When we were in for Aaron's last  surgery, we heard a new sound in his heart.  I had heard it earlier in the week, but I really don't listen to his heart that often, so I wasn't sure how long it really had been there.  (It's hard to hear his heart over his lungs and the ventilator.  I really have to just focus on it to hear it.)  He also has a murmur, because of his VSD, that I've never been able to pick out.  But after surgery, the attending on the floor also heard it.

Turns out it's something called a "split S1"  The S1 is the "lub" in the "lub-dub" you hear when you listen to a heart.  On Aaron, you could hear the first sound clearly, but immediately after, and before the second sound (S2), there was almost a faint echo.  It appears that this is no big deal for our hero, but it did earn him a quicker follow-up with his cardiologist, Dr. Menon.  The plan had been to return in December, but with this new development, we were asked to see him this last week. 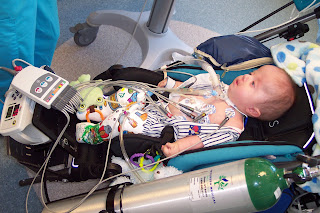 In the above picture, he's having an echo.  It uses the same technique and everything as a prenatal ultrasound, but focusses entirely on the heart/lungs.  He wasn't real thrilled with holding still and really wanted to help the tech with her wand.  His results were very good.  The right side of his heart continues to be less thick (unthick?) and his pressures continue to decrease.  The thickening was the result of his bout with heart failure a year ago, so the decrease in thickness is a very, very good sign.  He also still has his PDA.

The ductus arteriosus is open, or patent, in an unborn child.  It allows the baby's blood to bypass the lungs, since it doesn't need to pick up oxygen there before it's born.  After the baby is born, it closes so the blood is all routed through the lungs.  Some children, usually preemies or other compromised infants, don't close on their own.  Sometimes it has looked like Aaron's was closed, but when he's upset, or very active, during an echo, we can tell for certain.  And yep, his is still open.  It's very tiny, and unless he was having something else done, we wouldn't close it.  But if we do end up closing his VSD in the future, we'll have that closed as well.  But that's all a long time away.

In his second picture, he's having an EKG done.  Yep, that's 13 electrodes on that little body.  Somehow, it doesn't seem like as many as last December, but his body is a lot bigger now, too.  That also came out with very good results.  So it looks like the split S1 is just Aaron being Aaron and keeping us on our toes. 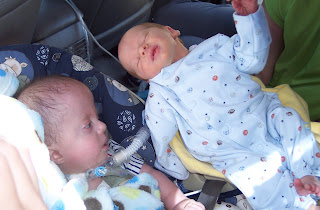 Speaking of tiny bodies, after our cardio appointment, Aaron and I stopped by my sister's home and got to meet my newest nephew.  Little Jacob seems so little!  I think he's got about 3 pounds on where Aaron was when he came home, but that's really hard to imagine.  I couldn't believe how small he was, but he's SO CUTE!  Our family's been blessed with three new little spirits in the past month:  William's brother's wife had a little boy in mid-July, then my sister, Liz, had her son towards the end, and Mara's Jacob was the last one. 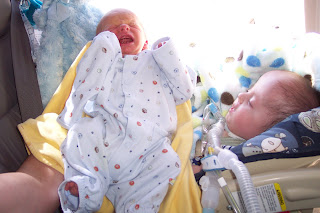 Aaron was pretty interested in little Jacob, but when he started to cry, Aaron looked really confused.  What was that he was doing?  It's not a sound he remembers hearing.  Poor kid was just not into the picture taking thing.
There's a new group on facebook these days called LDS Disabilities.  I really find I like it a lot.  One (or several?) of the moms are also part of a group called M.O.S.S., or Moms of Special Spirits.  There's a get together next weekend, and I'm really excited to try to go.  It's kind of like when I went to school back east, and then came out to BYU.  I had (and have!) some great friends from NJ.  We had a lot of fun together hanging out, talking, working and so on.  But when I came to BYU, where so very many share the same beliefs that I do, it was really like putting a fish into water.  I didn't even realize what I had been missing.  It was just so easy to not have to explain myself.
My facebook account is like that, too.  I wouldn't trade, for the world, the friendships that I have made with other moms on this journey.  They have saved my sanity, and probably Aaron's life, with their insights and humor.  And they are WONDERFUL advocates for our children.  They have a let's-get-to-work mentality and see what we can do to improve not only our own child's life, but others as well.  As parents of medically fragile children (which is different from special needs in a crucial way), we understand all too well the precariousness of this life.  We know that so many will grow their angel wings too soon for us.  But that doesn't mean that we just give up and sit in a corner and weep.  Yes, we weep, yell, scream, cry, but we also go on trying to help others.  One of the best, most wonderful women I know advocates in large part because her baby, Annie, wasn't given a chance.  She died at 80 days under very suspicious circumstances.  But she has been right there with me, every step of the way, helping and checking in.
That said, I really have enjoyed connecting with other moms who get the alphabet soup we use as Mormons.  They understand the sacredness of sacrament meeting even when, or especially when it's juxtaposed with all the challenges of special needs.  And I can't wait to meet in person some of these other moms.  Last week when I got to meet Jennifer, Elanor's mom, it was such a pick-me-up.  I had been sliding down emotionally for a little while, and was not a happy camper.  Meeting her was such a great experience.  There's something about seeing someone face-to-face that is so theraputic.  So, yeah, I'm really looking forward to next weekend and hoping I can make the get together.
Posted by CompatibleWithJoy at 4:36 PM