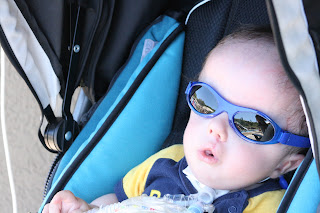 Aaron has had a good week.  Today marks his 14 month birthday, that's 486 more days than we were told we would get.  Our little miracle lives on.  This week he was actually trying to roll over.  He just kept getting stuck on his shoulder.  He still can't quite pull his head up enough to get over that shoulder.  The casts help him because they help anchor his legs in the right position so he can keep working on those upper trunk muscles. 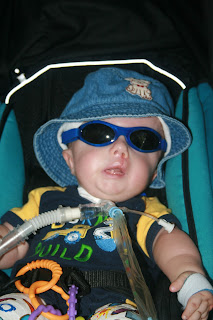 He also got his cool, new sunglasses this week.  We tried them out for the first time at the pool (you can see it reflected in the glasses above).  Amazing success!  Usually, when we go out mid-day, it's really hard on him.  He coughs and sneezes and desats and is generally miserable.  This time, he looked around and went to sleep.  No increased oxygen, no suctioning, no venting.  Much happier boy.  And looking so cool! 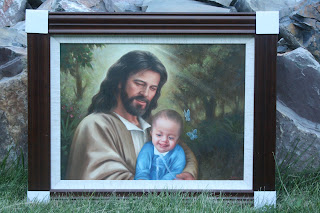 Grandpa came to visit for a few days this week and brought an amazing present from China.  The artist captured Aaron's smile and spirit perfectly.

Yesterday on our way home, Aaron & I stopped to see my perinatologist.  Dr. F has been so amazing.  She gave us the gift of being in the driver's seat with Aaron's pregnancy.  She used her expertise to help and advise us, but left any decision that she could up to us.  More and more I'm discovering what a rare gift that is. 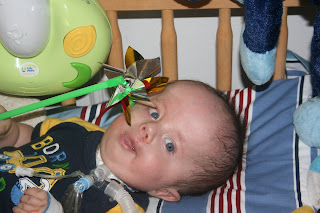 Here, Aaron is playing with his pinwheel.  He has so much fun grasping it and waving it back and forth.  Mary got lots of smiles for helping him do this. 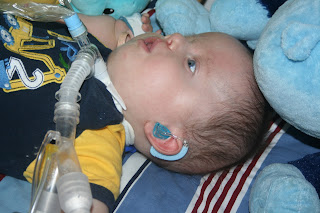 And then, yesterday, we went to get hearing aids.  Normal hearing registeres at 25 or lower.  Profound hearing loss is 90 or higher.  Aaron's registers between 70 and 90.  His audiologist wants to be gentle with him, and we really can't know how much he truely hears, so they are set at 50.  We tried really hard to get him to react at the hospital to see if he was hearing or not, but he was just too tired.  It was like, leave me alone already.  It's naptime.

So then, when we got home, I put them in and turned them on after his music was already going.  It was amazing to watch as they registered the sound.  His eyes got so big as he heard the music!   Although he's always been responsive, he has been much more so since yesterday afternoon, .

Today we went to the Alpine Days Parade.  It was much smaller than previous years, but Aaron was still there!  And unlike the parade, he's much bigger!! 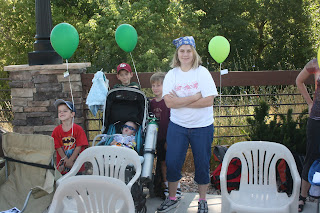 We found some friends of ours to sit with.  Here's Michael, Joseph, Andrew, and a special fan, Tonya with Aaron while we're waiting for the parade to begin.  Tonight the plan is to take him to the fireworks, his first.  What a way to celebrate 14 months.  A parade and fireworks, and I'm hoping he thinks they're all for him.
Posted by CompatibleWithJoy at 1:30 PM