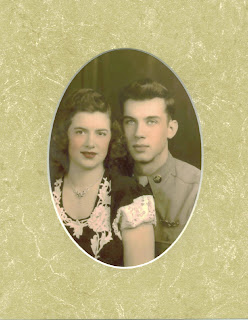 Aaron's middle name comes from my grandfather, my Papa.  He passed away just after we were married.  I still remember coming home to our little apartment after dropping someone off at the airport and seeing the light blinking on our answering machine.  I knew immediately that Papa was gone.

On Wednesday, his sweetheart, my Nana, joined him.  She has been battling cancer for so long and is now at rest.  I remember her making grilled cheese sandwiches for us in Texas as we'd sit on the patio, taking a break from swimming in their pool.  I remember her love of reading.  She was always reading.  I remember, I must have only been two or three, one time she and Papa came to visit.  They were in an RV (at least that's the way I remember it.)  I remember Maurie and I running across a HUGE field to hug them.  We were so excited to see them.


I remember living in their home in Pennsylvania and picking wild blackberries when Mom was pregnant with Michelle and Dad was TDY.  I remember her Madam Alexander dolls, especially her "Little Women" dolls.  I was facinated by Meg, Jo, Beth, Amy and Marmee.  I loved just looking at them.  Mostly, I remember her love.   I remember the love she and Papa shared.  Every evening, they would have a glass of wine before dinner and toast each other with, "I love you."  And NOBODY ever said ANYTHING that might possibly be derrogatory of her in front of Papa.  You just did not say anything that wasn't nice about anything about his wife, not her cooking, not anything.
They were strong people, raised in a different era.  They waited 7 days after they met to get married, because they were waiting for Papa's birthday.  And then she sent him off to war.  This was the second time she sent her husband to war.  I can't imagine the fortitude that took.  Papa was a career military officer.  He retired as a Colonel in the United States Air Force and she followed him and made a home for their family all over the US and overseas as well.
She told me that when they got married, they decided they'd never go to sleep mad at each other.  I remember her telling me (and this was after Papa passed on) that they never did.  But there were a lot of nights they both sat up awake all night too angry to make up and go to sleep! 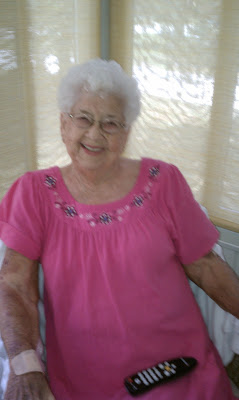 Nana was a very strong woman.  I admire her so much.  Her life wasn't easy, but I never realized it as a child.  She married young and sent her first husband off to war.  While he was gone, she gave birth to a baby boy, too early to survive.  The nuns wanted to take him and leave him in another room to die.  She refused.  She held her little baby while he lived and while he died.  And then she sat up all night holding that little body, not sleeping, until her mother could get to the hospital and take him.  She refused to give him up to nurses that did not value his life.  How very much I have learned from her.  She of all people in my family understood the pain and fear I have gone through these last two and a half years.
She became pregnant again, this time with twins.  Some time after that, her husband was declared MIA in the Pacific Theater.  She gave birth just a few weeks later, and then shortly thereafter, was informed that he had been killed.  After she and Papa married, they raised those twins, my mother, and her brother.  They raised them to love country and family.  They raised them to be strong and supportive.  I think the fact that she was able to stay in her home, being cared for by them until the end, shows just how strong those bonds are.  They are a family in every sense of the word.
I hope I can raise my children as well as they have.  Nana never got to meet Aaron.  By the time he was born, she was too ill to travel, and he couldn't make the trip to Florida.  But Aaron bears Papa's middle name, Noland.  We hoped that in giving him his name, he would demonstrate the same strength as Papa.  And, I believe, Papa takes a special interest in him from the other side.  I couldn't think of a better guardian angel to stand by my baby than my Papa.  I miss you, Nana and Papa.  Enjoy heaven.
Posted by CompatibleWithJoy at 8:47 PM