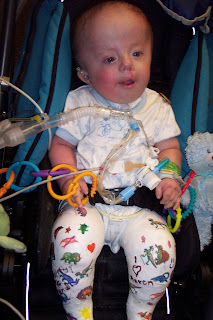 Please bear with me as I'm not sure where this one is going.  Aaron is doing really, really well.  In fact, so well, that sometimes he gets a little silly.  We went in a week ago to have his casts removed and look at his feet.  Initially, at least, it looks like his feet may be changing.  So we also put new casts on.  Next Monday when we go back, he'll also have x-rays done to see if the bones have shifted at all.  If they have then we'll continue casting.  If not, well, that experiment will be done, and at least we'll have his feet back for sensors. 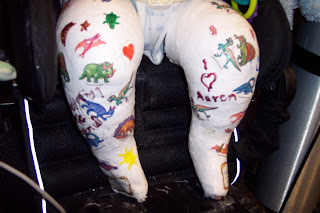 'Cause this little monkey, he's been having lots of fun with his oxygen sensor.  Me, not so much.  Because we don't have access to feet, we have to put it on his hand.  Use your imagination and you can probably figure out how that's working.  He wiggles and waves his hands a lot.  He likes to pull it off completely.  And, perhaps his favorite, he likes to chew on it.  The sensor works fine when he chews on it.  At least it's holding still and attached, but when it gets wet, it's all over.  No pick-up at all.  So this past week there have been alarms galore going off.  I finally asked Deborah to sit in there with him, because most of the time, they are false alarms, but you can't tell if your in another room.
This week Michael and Andrew chose dinosaur stickers for Aaron's casts.  Daddy also painted messages like "I love Aaron" and "Wonderful little friend" on them.  We even put a turtle on for one of his doctors.  She's really partial to turtles.  Aaron wasn't so sure about taking those casts off.  His eyes were big and scared with the noise and vibrations from the saw.  I just kept talking and smiling at him, and it was almost like, "I'm really, really not sure about this, but you look like things are okay, so I'll hang in there for now.  But you better be sure about this, Mom!"  On his toes are stickers that say "Lengthen Your Stride."  Inspiration more for me than I think for him.  His stride is already pretty impressive. 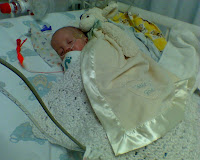 So really, Aaron has been having a very good time.  As my doctor said last week, "This is obviously NOT failure to thrive."  But several of his little friends, and their families, are really struggling.  Sometimes I have a hard time with the juxtaposition of a seemingly healthy, happy baby, and the knowledge that it can change in an instant.  This past week, one of Aaron's little T18 friends, Peter, grew his angel wings.  Peter's mom founded Prenatal Partners for Life after Peter was born.  She sent Aaron a lamb with "Child of God" printed on it.  This lamb has been to almost every one of Aaron's hospital admits.  It is in his bed here at home.  He loves to grab at it.  Mary has been so helpful to so many of us as we've traveled this road.
Another special baby, Caleb, is 29 months.  Caleb's mom, Jeannette, has been right there with me since Aaron's birth.  She has been wonderful to provide advice and a listening ear.  She is a woman with a profound faith in our Savior.  Last Thursday, Caleb went in for an adnoidectomy because his were so large they were making it hard to breathe.  After surgery, he had a heart attack.  Today, he had another.  My heart aches for them.  Please, if you will take a minute, please pray for these families.  They need the strength and peace that comes from prayers offered.  They need it now, and will for quite some time in the future.  I long to uphold them as they have held me.  I wish I was close enough to put my arms around them.
So as I count my blessings, and I have so many of them, I also plead for understanding from my Father.  Because, most of the time, I don't understand, or maybe I don't want to have to understand.  We love our little ones so much.  It hurts so bad to watch them suffer, but even more to lose them.  If not for the knowledge that this life is a school and not the end of everything, I think I would truly lose my mind.  It is only with my faith in my Savior and my Heavenly Father that I can find the strength to not only go forward, but enjoy the journey.  I am so glad he has entrusted us with one of his special angels.  I once read (and haven't been able to find the source again!) about a family similarly blessed.  A neighbor remarked to the father that "We have heard of the ministering of angels.  It would be interesting to know why your family has been chosen to minister to one of them."  These babies truly are special angels and, as hard as it is to watch them suffer, those who are allowed to love and care for them are among the most blessed I know.


Posted by CompatibleWithJoy at 10:39 PM