Thankful to be Home! 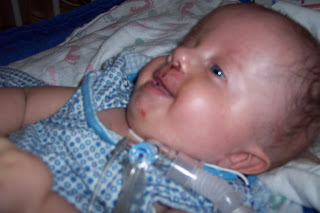 We're home!  Last night, Aaron didn't sleep much, but he was just playing.  Nothing new there.  It was so much fun to see him happy and smiling and hitting his toys again.  His nurse even read some books to him yesterday while I was working.  He had no desats at all, not even little ones.  So this morning, Dr. Vukin rounded about 8:00 and we were on our way just after 9:00!  I don't think we've ever been out that early.  But then it helps to not have to fill prescriptions. 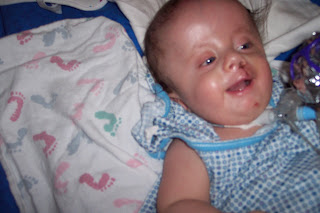 His lip looks wonderful and we have all our follow-up appointments.  I thought we might be seeing a little swelling yesterday.  Yes, after last week, I'm paranoid.  But it looks like instead, the swelling has continued to decrease and we're seeing the definition around his mouth again. 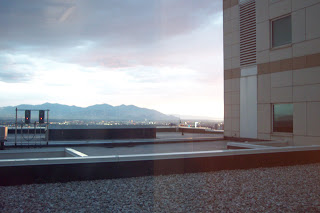 On weekends, the hospital empties out a bit as children are discharged and there are no planned surgeries.  So on Sunday afternoon, we moved rooms as the staff was consolidating patients.  I joked that I had requested a different view.  I really had no idea that there would be much difference, but there was.  The first room had a view of the parking garage.  It wasn't bad, but not anything great, either.  The new one had a panoramic view of the valley. 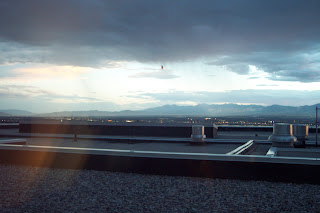 Last night I was looking out the window across the Salt Lake Valley.  I reflected on the beauty that was created for us to enjoy here.  As I did, I noticed something off in the distance.  It was a lifeflight helicopter and it landed on the roof, just to the left of our window.  I don't know what was happening, but there were three that landed in the space of 2 hours, and another that flew just over to the University hospital (they only bring children to PCMC).  I thought about how there is opposition in all things and the trick is to find the Lord in both the good and the bad.  Without the power of love, there would be no grief.  But I don't know anyone who would give up feeling love to not have to feel pain.  It's part of who we are and this journey we are on. 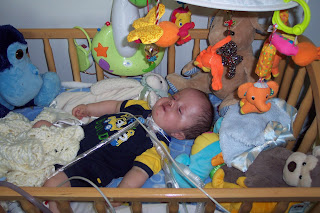 We're back at home now, and the first thing Aaron did was enjoy a nice rocking time with Daddy.  I think he's really missed that, especially since his original surgery left him with so much swelling that it was hard to enjoy shoulder time very much.  Today he thought life couldn't get much better.  Now he's pressing all the different buttons on his mobile after taking his mid-morning snooze.  Yep, it's good to be back.


Enter into his gates with athanksgiving, and into his bcourts with praise: be thankful unto him, and bless his name.  Psalms 100:4
Posted by CompatibleWithJoy at 1:23 PM