SO glad we didn’t go home last night.  I actually wondered if I was being overly cautious.  After all, we were almost up to his full feedings and there was no reason to think going the rest of the way was going to cause a problem.  And it didn’t.  But something did.  Starting about 8:00 last night, Aaron started desatting.  Big desats.  Down in the low 70’s and low 60’s.  He did this through much of the night, about every two hours.   And the respiratory tech would need to be called and we would still have trouble bringing him back up.  So it was really like about an hour to an hour and a half between when it would end and the next one would start.  We almost ended up back in the PICU.  He finally quit after his 2:00 a.m. desat.  He’s had a few minor ones since then, but not quite that bad.  But the long and short of it is, if we had gone home, we would have come back and in an ambulance, with sirens. 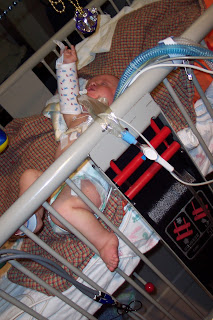 This morning, Aaron has already had an EKG to test his heart rhythms.  It actually looked like his last one, last February.  But cardiology does want him to follow up with Dr. Menon in the next week or two instead of waiting until December.  We’re also pulling a urine culture and trach cultures to see if he’s fighting off something else.  There just isn’t an obvious answer as to what is going on.  As far as his surgery goes, his lip continues to look wonderful.  I think it may itch a bit because when we take off his arm restraints, his no-nos, he tries to rub it.  So we have to watch carefully when he is taking a break from them.
On a humorous note, at home, Aaron really likes to turn almost sideways in his bed and stick his feet out.  Here the bed is bigger, so it’s more work to get his feet out the side, but last night, he was working really hard on it.
That or he was trying to escape.
I went to Sacrament meeting here today.  I’ve realized it’s always a good idea to grab tissues on my way in.  It’s almost like that’s one place I don’t have to make sure I stay strong.  I can relax and just enjoy the spirit.  The opening hymn was Abide With Me. 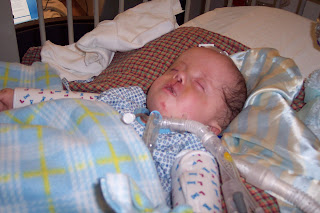 1. Abide with me! fast falls the eventide;
The darkness deepens. Lord, with me abide!
When other helpers fail and comforts flee,
Help of the helpless, oh, abide with me!
2. Swift to its close ebbs out life’s little day.
Earth’s joys grow dim; its glories pass away.
Change and decay in all around I see;
O thou who changest not, abide with me!

3. I need thy presence ev’ry passing hour.
What but thy grace can foil the tempter’s pow’r?
Who, like thyself, my guide and stay can be?
Thru cloud and sunshine, Lord, abide with me!


After that, the brother who gave the opening prayer, called down the powers of heaven to bless and comfort each of the children here in the hospital.  Between the hymn and the prayer, I was very glad for the Kleenex.  Sometimes it feels so hard.  Sometimes it IS hard.  We don’t know how long Aaron will choose to stay with us.  And right now, he’s got some scarier symptoms.  And, as I looked around the room, it was obvious that there are many others in similar situations.  And those were just the children who were well enough to come.  I sat next to a woman whose daughter was just put on the liver transplant list.  Next door is a little boy battling cancer.  In the PICU, we were next to a little boy who had been resuscitated after a near-drowning on Friday.  And for those of us with children with life-threatening illnesses, “Swift to its close ebbs out life’s little day” has new and personal meaning.  It does seem like just a little day when we look at how much time we have, or don’t have, with our children here.  I don’t know how I could possibly even face it without knowing that my Savior loves me and sustains me.  I know He is there for me, “Thru cloud and sunshine,” and always.
Posted by CompatibleWithJoy at 12:52 PM