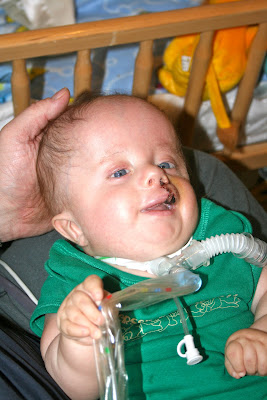 It will be one week tomorrow since Aaron's surgery.  And tonight we captured a smile!  It's still hard for him to smile.  I would imagine it would be with the swelling he still has, but he did it!  He's still pretty uncomfortable, mostly from his circumcision.  But he's getting back to his playful self and even putting his hands in his mouth.  Hopefully the rest of the swelling will go away soon and he will feel even better!

This morning I could hear an extra sound in his heart.  I couldn't tell what it was, so a new neighbor, who is also a NICU nurse at Primary's, came up to take a listen.  I was so grateful she was willing to do this.  His echos have been progressively better, but his heart rate has been up a bit and I was worried.  I think it's probably because of his discomfort.  But I was a lot more comfortable after she came.  We'll just have to keep on using Tylenol for him.  It's no fun trying to work through the pain, and it does hamper the body's natural healing process.
Posted by CompatibleWithJoy at 6:45 PM