Update to the Update

Okay, so I posted a little too soon.  In fact, just by a few minutes.  But the game plan has changed.  We've got a new one, we think a good one, but a different one. 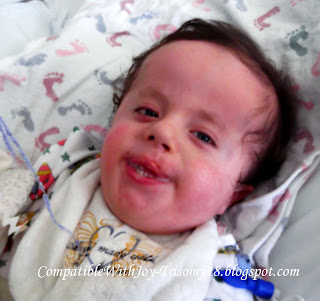 Aaron is still looking pretty good.  In fact, instead of scheduling his Tylenol, we're going to let him tell us when he needs it.  And right now, he's an hour past when he can have it and still looking good.  You can also tell by the smile, he's feeling better.  For the past several days, if you even moved him, he would start crying.  He's not 100%.  He's still pretty tired, not much energy, but the smiles are back.

However, he does have a staph infection, both in his trach and in his blood.  So it needs to be treated aggressively.  I'm so grateful we came in when we did.  They're pretty sure that it started in the trach and then moved to the blood.  But it doesn't appear that it's affected any of his organs.

So here's the game plan.  We'll get blood cultures back tomorrow morning.  At that time, if they're positive, they'll draw them again and we'll keep waiting.  If they're negative, we can move forward with a PICC line.  They don't like to put PICC lines in if there's an active, uncontrolled infection, so he has to have a negative culture first.  Those take 48 hours to grow out.

Because we have Papa Bear's viewing tomorrow evening and the funeral and burial services on Wednesday, we'll be in a bit of a holding pattern anyway.  I'll need to learn how to take care of the PICC line and all before we can go home.  Then he'll be discharged and finish out his IV antibiotics at home.  Sometimes I think this little man is trying to take me through all the clinicals of nursing school, without me having even enrolled.

Needless to say, he's not starting school next week.  If this was going to be a long-term thing, if he was older, I might look at it differently.  But it's not going to hurt him to miss the first week or two of school.  So we'll just keep on going.  But I'm so grateful this has been caught as early as it was.


Life's problems wouldn't be called "hurdles"
if there wasn't a way to get over them.
~Author Unknown
Posted by CompatibleWithJoy at 1:17 PM