Where Things Stand (I Think) 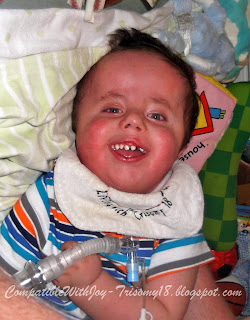 I guess after this past week, it's hard for people to know just where we are emotionally.  Actually, we're in a pretty good place!  Yeah, we got news no one wants, ever.  But you have to realize, we've been getting this kind of news for three and a half years.

Medically, no, things don't look so great.  His heart/lung issues have progressed, faster than they're "supposed" to.  He's been started on a new medication which can have some nasty side effects for the liver.  Read that again.  It says "can," not "will."  And our thought is, what good is a beautiful, perfect liver if your heart can't get the blood through your lungs to pick up oxygen?  So it's not ideal, but it's reality.  The other thing is, it will probably take a month to kick in, and maybe up to three months to be fully effective.  So yeah, there are still some mountains to climb there.

But Aaron has been a fighter from the beginning.  From the start, or even earlier if you measure birth as the beginning, his doctors have mentioned that he doesn't "play by the rules."  He writes his own story. And there just haven't been enough children with his condition who have survived long enough to really "know" where it's going.  For example, he got a blood transfusion that turned things around 180 degrees.  His hematocrit wasn't anywhere near low enough for it to have made this kind of a difference, but it did.  I joke that since we're all O+ at home, we'll just stick a needle in one of us and another in him with a line in between.  When one person has given what they can, we'll move onto the next.

And right now, Aaron is in a really good place!  And when he's in a good place, so are we.  Those smiles and laughs and songs just keep spilling out of him.  Oh, he'll probably sleep through church again today, but that's because he threw yet another all night party last night.  And I know a lot of others who might be tempted to sleep then as well!

I'm trying to adjust my mind to his new oxygen parameters, and it's a little hard.  After trying to keep his sats in the mid to high 90's for the past three years, it's a little disconcerting to try to be okay with mid 80's.  And I just haven't gotten anything like a handle on thinking low 80's are all right.  But his cardio kept saying that if he looks good, acts good, it really is not only okay, but may actually be better for him than higher oxygen flow.  So I'm working on my thinking here.

It's interesting to feel how my own body reacts to changes in his, and it can go through the cycle a few times in a day.  His numbers change for the worse, and I tense up.  I find it harder to focus on other things.  But then they improve, and stay good for several hours, and the sun has come out again, the sky is blue and birds are singing.  Yep, life is good.

The one thing we do know is that Aaron will be here just as long as he is supposed to.  He has been promised that he will not return Home until after his mission here on earth is through.  Our loving Father knows him and knows his days, and knows us.  And that I find comfort in.

"Having lived with our Heavenly Father and having come to earth life, we must have determination to return with honor to our heavenly home.”  -Elder Robert D. Hales

Posted by CompatibleWithJoy at 8:42 AM