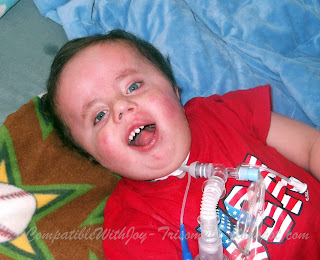 This week has been a pretty intense one.  Oh, not from a physically caring for Aaron perspective, just from a "that's life" perspective.  I took time off of work when we found that he was struggling and we were changing nursing companies, ventilators, and a host of other things.  Now it seems  to be catching up with me in the form of very heavy work loads.  Oh, well, it translates into a better paycheck.  Not a bad thing when I took just over two weeks off.

Plus there is an extended family member who is having their own medical challenges right now.  Since I've been blessed (and yes, "blessed" is the right term) to have learned a lot about hospital situations and "medicalese," I've been helping out with communications.  Then add in the general craziness of a busy household.

But these things, the "that's life" stuff, paled in comparison to what I was really needing to have accomplished this week.  Last week, the cardiologist put Aaron on a new med.  This one is very tightly controlled.  You know when you go to the pharmacy and have to show your driver's license and prove that you're over 18?  Well, they've got nothing on this one.  Not that I think it's got any street value at all.  In fact, I'm pretty sure that it doesn't.  But the hoops you jump through could make it eligible for Barnum and Bailey's famous circus.  So here's the story of the miracle this past week:

I call the enrollment program for the drug, because the first step in actually getting the med is to enroll in their mandatory program.  They don't know anything about us.  Hm, well, it was put together on Friday, maybe it will take a day.  Plus, maybe there has to be insurance approval before the info is sent to them.

The enrollment program still doesn't know anything about us yet, and neither does his insurance company.  Or rather, the insurance hasn't heard anything about a new med.  Yeah, the one we had to get special clearance from the hospital for to be sent home with a one-week supply.  We've now used four days of that one week supply.

So I put in a call to cardiology.  Bonus, the doctor himself (not our regular cardio, the one who did the heart cath) calls me back.  Um, turns out I haven't signed the paperwork to be enrolled in the program (didn't think I had but I signed so many things last week I wasn't sure) and they also need a letter of medical necessity.  There's a few options, they could mail it to me and I could send it back (yeah, I think that would effectively take the rest of our time window), they could fax it (don't have a fax here), or I could come up there.  I asked if they could email it and yes, we had a way to do this.  Good thing, too, 'cause I wasn't really interested in taking over two hours out of my day to go up there, but I would have done it.

As soon as it came through, I signed and sent it back.  Now to find our regular cardio and get his signature on it.  His secretary was out of town that week, but lucky us, the secretary for the heart cath cardio was covering for her.  Yea!  At 4 o'clock I hear from her that the enrollment form and the letter of medical necessity have been faxed to both the insurance and the enrollment program.

Shortly afterwards, I call over to insurance again, and they don't know anything yet, but it's probably in the pile that's just come through.  They'll keep an eye out for it and let me know when it arrives.

Bright and early, I put in another call to the insurance company.  They've got it.  It could take up to ten to 14 business days for approval, but they've usually been getting them done in about six business days.  Anyone see an issue here?  And I can't tell them that it's urgent (well, I did, but that was just conversation, it didn't carry any real weight) it has to come from the doctor.  Once again, I'm calling this secretary who has been fabulous but will probably be glad when I recede into the background.  Just after I hang up, another insurance agent calls me back to tell me that the paperwork is there (the one I spoke to the night before) and that she's also watching it to make sure it's flagged urgent as soon as they get the call.

At 8:20 a.m. (I did say bright and early) the secretary calls me to tell me that she's made the call and it's been marked urgent and will be taken care of within the day.  About 10:30 I call insurance again and find that it's being looked at, but they need more paperwork on Aaron.  At 12:10 p.m., I get an email from the cardio secretary saying that it's been approved!  The major hurdle in all of this has been leaped.  In just over 24 hours, we ('cause there were a lot of other people involved besides me who made this their priority) have gotten approval for a major medication from insurance.  And that's down from what easily would have taken three to four weeks had it just ground through the process on its own.

I call the enrollment program and they're also processing paperwork and we go over, again, the side effects, both probable and possible, and the need for monthly labs.

I call the specialty pharmacy out in Tennessee (I said it was special) and they don't know anything about us.  Yep, starting to sound like a broken record.  I call back to enrollment and they've sent it over, it might take an hour or two to process, but it's marked urgent, 'cause we're almost out of meds.  An hour later, they still can't find us, so I use the magic name that the enrollment program gave me, their liaison  with the pharmacy.   She works for the pharmacy processing the new claims for this med.  She's sent it over to be filled twice now, so she puts me on hold while she tracks it down.  She sends it again and tells me to call back in two hours if I haven't heard from them.

Almost two hours later, the phone rings, YEA!!!  It's a pharmacy tech who goes over all the nitty-gritty like address, what to do when running low, and so forth.  Then I speak to a pharmacist about how to prepare it, store it, safety precautions for those who prepare it (yeah, those nasty side effects need to be avoided at all costs), and other drug interactions.  Finally, at 5:30 p.m., they're ready to ship it out. 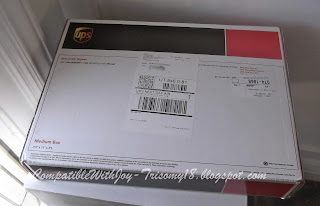 Mid-morning, we have touchdown, a UPS package delivery.  Plus, I walk into his room where he's sleeping (yep, totally backwards on his days and nights again) and he's satting 99 on two and a half liters of oxygen.  I haven't seen that in months.  And yes, once again, my own breathing is better as well.

So thankful for those who worked so hard for us on this.  All I could do was be the squeaky wheel.  I had to rely on others, the doctors, the one AMAZING secretary, the insurance folks, the pharmacy liason, and so forth to actually get the work done.  A breakdown in any of these spots, people who weren't actually engaged in helping other people, and it wouldn't have happened.  But it did and I'm so glad.  So is Aaron.

“It had long since come to my attention that
people of accomplishment rarely sat back
and let things happen to them.
They went out and happened to things.”
-Leonardo da Vinci

Posted by CompatibleWithJoy at 8:43 AM