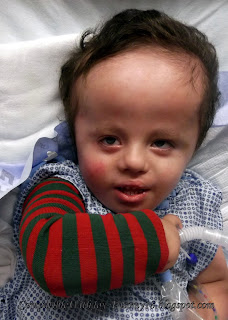 Aaron is sporting a new fashion accessory, and thinking it's pretty cool.  I'm wondering if the red/green colors pop for him like they do for me, or if they blend together like they do for the brothers who are colorblind.

It's a legging, yeah, one of those things we used to wear back in the early 80's.  It was probably a good thing that they went out of fashion for the most part.  But they sure are great for him!

He got his PICC line on Tuesday and it's in his (and everyone else's) best interests if that stays intact, clean, and so on.  Especially since it lands pretty much right next to his heart.  Yeah, probably not the best place to be introducing bacteria.

So we cover it with a legging, and he thinks it's pretty cool!  In fact, I had to hold his arm still for a minute to get the picture. 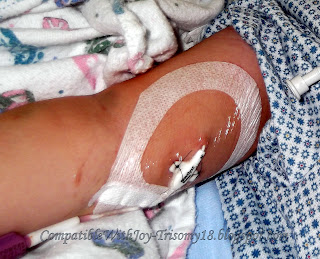 He's doing much, much better.  In fact, he's been satting in the mid to high 90's on just over a liter of oxygen. We're waiting for his IV pump and medications to be delivered to us here at the hospital and then we'll be on our way home.

And yeah, it's time.  He's spent the majority of the morning turned sideways in his bed, a sure sign that he's feeling pretty good.  Everytime we reposition him, he scoots right back to where he was.  A far cry from a few days ago when he couldn't even turn his head much without crying.  So thankful he's feeling better, and so thankful for all the prayers offered on his behalf.


"In order to be irreplaceable, one must always be different." - Coco Chanel
Posted by CompatibleWithJoy at 12:01 PM