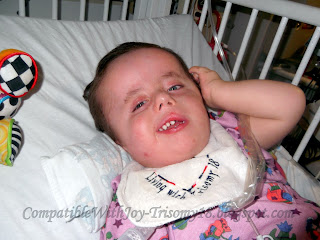 We have a happy boy!  Not all our news was good yesterday.  In fact, some of it qualifies as "downright bad."  But as the old TV show song went:  "You take the good, you take the bad.  You take them both and there you have the facts of life."

So to get the bad out of the way first.  His heart cath was not good.  He tolerated it well, but the info coming back wasn't good.  His already high pressures are significantly higher, like, much, much higher.  And they've changed in a much shorter time than was expected.  There is no cure for Aaron.  The only cure is a lung transplant and he's not a candidate.  They are adding in another medication to help slow it down.  It will not reverse it, and probably won't even stop the progression.  But we hope to slow it down.  It is what it is.  I don't like it, but I can't change it.  But I can put a bandaid on it, and hope it's a really good strong one.

Prior to his heart cath, they gave him a blood transfusion.  The transfusion doesn't have any effect on his pulmonary hypertension itself.  What it does do is add more freight cars to the blood train that hauls the oxygen around his body.  This lets him oxygenate better on less oxygen input and it also lets him sat lower.  Because there's more oxygen volume going around, he can have a lower sat rate.  And too much oxygen going into the body can actually be toxic, or in William's words, instead of oxygen, it becomes toxygen.  So it's not good for him to be needing 8+ liters just to maintain sats.  It can further injure his lungs.

But the good news is, he's back.  Our happy, playful, don't wanna sleep I might miss something bug is back.  He was more awake and alert in the recovery area yesterday than I have seen him since Sunday.  And he played All. Night. LONG!  Since Sunday, he's only been awake two or three hours every 24 hour period, and those were still very tired, inactive hours.  We saw him for the first time about 4 p.m. and he didn't fall asleep until between 5:30 and 6 A.M.!  We also saw the evidence of a long overdue ear infection last night and when I went to give him his ear drops at 9:30 this morning, he woke up to play again.  It does this mama's heart good to see him so happy.  I almost feel like his mirror.  When he's sad, I'm sad.  When he smiles, I smile.  And it can change that fast.  I'll take that good, as much as I can get.

So, right now, the only thing that has been done therapeutically is the blood transfusion.  Again, no bearing on his pressures at all.  But it's given us our bug back.  We'll be watching his red blood cells, although they were actually higher pre-transfusion than they were last December when he was looking great.  And we'll keep adding on freight cars as we need to either with more transfusions or a medication that will tell his body to kick it in gear and make more himself.

I am so grateful for the atonement and the Plan of Redemption.  I am so grateful for eternal families.  This would be completely unbearable without that.  But I'm also grateful for the extra time we're being given.  His time will be too short from my perspective.  Doesn't matter how long we get, it won't be long enough.  It's not him I'm worried about, really.  It's me.  I don't know what I'll do without him by my side.  And I'm grateful that day has been put off again.


This is the day which the Lord hath made;
we will rejoice and be glad in it.
Psalm 118:24
Posted by CompatibleWithJoy at 10:31 AM