Thinking Can Me Feel Sick

Okay, warning:  for those that haven't figured it out, I often write for my therapy.  You know, much cheaper and more readily available that conventional therapy would be.  This is one of "those" kinds of posts.  You may want to stop reading now.

Yesterday I wrote about Aaron's granuloma.  I actually did write after we did the trach change.  But it's that very trach change that has been weighing on my mind.  So I need to get it out.

From the time I can remember, I've been a worrier.  Now, I think that if you're just worrying, that's not necessarily a good thing.  But if your worries lead to plans of what to do if the "what if" happens, well, that can be good.  It's called being prepared.  And if you have no idea how to prepare for something, say a zombie invasion, just refuse to think about it.  No problem, right? 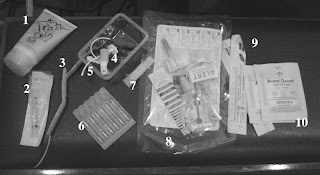 When a person is trached, they need to always have a second identical trach around for emergency changes.  And you do use that trach just for the routine changes, too.  But sometimes, the trach doesn't want to cooperate (because it's obviously never the person's body that has an issue, it's the trach).  So in that case, you're also supposed to have a back-up, slightly smaller trach.  Because without an airway, well, it's not a good thing.

We've occasionally had a trach that was a little more difficult to get in, but it worked out anyway.  Yesterday had the potential to be a bit more "interesting."  Because of that granuloma that we can see on the outside, there's a decent chance there's another on the inside.  It was unlikely to cause a problem since we've been changing it regularly (every two weeks), but the possibility was there.  So, in addition to prepping his replacement trach, I also got out not just the one size smaller, but the one smaller than that, too.  And I asked for back-up, too 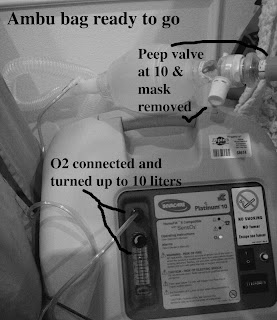 I haven't had a "helper" for trach changes now since just after he came home.  Not that I couldn't have one, I just didn't need it.  Last night, William came in with me.  And while it needed to be said, so he knew what was going on, it was a little unnerving to vocalize what needed to be done.  "If this trach doesn't go in, then I need you to hand me that one.  If that doesn't work, then this other one here.  And if that's not going in, I need 911 and tell them to be ready to intubate as they walk through the door."  And in my mind, I'm going through the steps needed to keep him alive until they get there.  Did I say that thinking makes me feel sick?

With both prayer and training on our side, the change went well.  Except for a lot more blood than I've seen in a long time, it was one of the easier changes.  But the thinking part, the planning part, well, let's hope that I've now got it written down, it will leave me alone.

In our family, we have a saying that "some things, Mom just doesn't need to know."  Now, probably not really true, but it refers to things that gives a mom gray hairs (and I have plenty already, thank you!) that turned out okay after all.  I think perhaps, knowing how to keep your baby alive and breathing might be one of those kinds of things.  Not that I'm not incredibly grateful for that knowledge.  I am!  But I think I would find it a whole lot more fascinating if it wasn't in regards to my own child.


The larger the island of knowledge, the longer the shoreline of wonder.
~Ralph W. Sockman
Posted by CompatibleWithJoy at 1:51 PM