It's Quiet Around Here 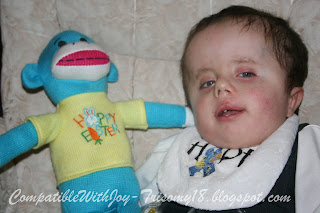 It's become really quiet around here.  Really, really quiet.  Through January, we had all nine of our kids under our roof, well, most of the time.  At least when they weren't at school or work or a million other activities.  Tonight?  I've got three.  Yeah, down by two-thirds.  In her defense, Deborah is at work tonight, and she'll be back in the morning to sleep, which will bring me up to four. 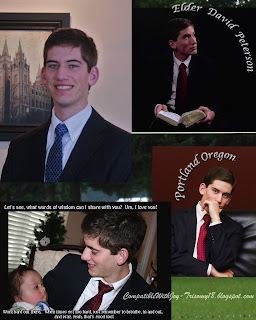 David left the end of January for his LDS mission to the Oregon Portland Mission.  He's serving in a town called Molalla and seems to be doing really well.  His emails each Monday are short and to the point, but trying to read between the lines, he's growing so much.

Early Monday morning, William loaded up the three oldest of our remaining boys along with a bunch of other boys and seven leaders and drove to South Dakota.  These kids are spending their spring break doing service projects on the Sioux reservation up there, one of the very poorest counties in the United States. 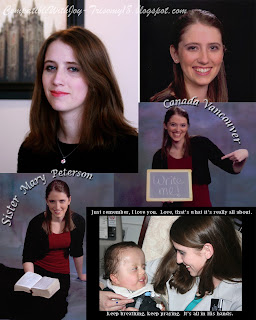 And then there's today.  Today, we dropped Mary off at the Missionary Training Center where she'll spend the next two weeks.  After that, she fly to the Canada Vancouver Mission and be assigned to an area in British Columbia.  That mission takes in almost the whole province of BC, so it will be fun to see where exactly she ends up.  And that leaves me with the three youngest.

I didn't cry, really I didn't, when we dropped her off.  As we drove in, she heard me catch my breath and warned me in no uncertain terms that I was not to cry!  She was done crying, she wasn't going to do it anymore, and so I wasn't allowed because then she'd start.  But while my kids came into our home very fast (the first three in less than two and a half years), they're leaving even faster.  And this was not a scene I imagined all those years ago when I still had all three in diapers.

Mary has spend the last few days cuddling a lot with Aaron, and he has been so responsive to her.  They've taken several naps together.  I watch as he curls up against her and wonder, does he recognize her need for him?  Will he still be here to do it when she gets home in 18 months?  How can we cope if he's not?  So now, now that she's gone and the house is quiet, now is the time for tears.

Aaron has been on a bit of a roller-coaster the last few days.  But it's just been a baby one.  Not like the monster-scary ones that he sometimes likes to take.  His heart rate has been a little higher, he's needed a little more suctioning, and his oxygen hasn't been quite as stable as I'd like it to be.

It leaves you wondering, how many scenarios can go through your head in a very, very short time?  Is he sick, again, still?  It's been ten days since he first got sick, just about the length of a virus.  Has he not been getting enough fluid?  Yeah, I checked that one out and according to charts, he was being short-changed by about three to four ounces considering his weight.  So I recalculated his fluid/calorie intake to adjust for that.  Is it that we've lowered the support on the ventilator, and can he tolerate the new settings?   Is he just needing some time to get used to them, or is it more than his already scarred and fragile lungs can handle?  See what I mean about a myriad of thoughts?  That took me much longer to write out than it did to think of them. 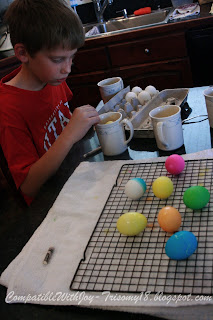 Fortunately, today he seems to have settled down.  He's still pretty tired, but his nurses tell me he's not sleeping much at night, so I guess he's entitled to be sleepy during the day. 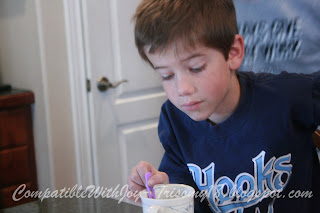 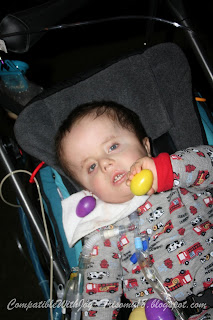 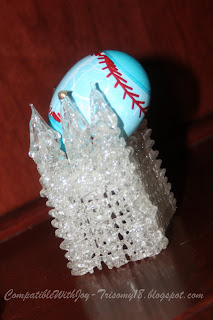 This last Sunday was Easter Sunday.  I am so grateful for the reality of that Easter morning over 2000 years ago.  So grateful for the knowledge of the resurrection.  I think I've always believed in it, but when holding a child close that you won't get to keep, when letting an older child, or two, go away for an extended period where you won't be able to hold and protect them, it brings new meaning to life.  It requires a deeper, more personal searching and knowledge than I've given it before.

I love Easter eggs, particularly the red ones.  Red is the color of death, and the egg the symbol of life.  I love the symbolism of life coming out of and through death.  No matter how dark the Fridays of our lives, Sunday will always come.

I'll leave you with a (very short!) video of Aaron with his Easter Eggs.  He thinks they were maracas!