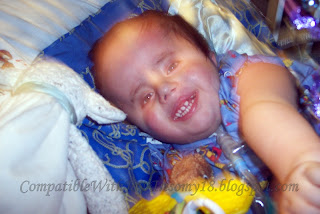 Well, our happy bug is back.  (Excuse the lighting, it's awful, I know.  But the smile is priceless!)  Starting yesterday afternoon, he decided it was playtime.  And true to form, he played aaaaalllllll night.  Even his pulmonologist mentioned this morning that he thought he must be a teenager.

His heartrate is down, he's smiling, sats are good, and his lungs are sounding pretty clear, too.  So what are we doing here?  Yep, it's his oxygen.  He's still needing six to eight liters of the stuff to maintain those good sats.  Can you say pulmonary hypertension?

So cardiology is also coming by.  We'll talk about what to do next, and it may be that we just stay here, giving him what he wants in the way of oxygen.  It is a great med for this, and there really aren't adverse side effects involved.

It's also been nice to see some friends up here.  One was from home and stopped by for a visit with a bag full of goodies.  The others are also special needs moms and are up here with their own kids.  Two I hadn't even met in person before, but we knew each other through social networking.  But mostly, mostly I'm just glad to have my happy boy back.


A smile is a curve that sets everything straight.
Phyllis Diller﻿
Posted by CompatibleWithJoy at 1:48 PM