Today is the first day of spring, although Mother Nature seems to have missed the memo.  Father Winter seems to be overstaying his welcome this week if you ask me. 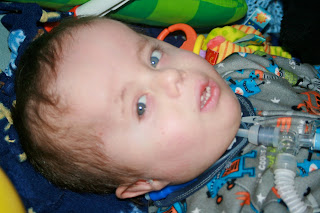 Aaron had (some more) doctors appointments this week.  Yesterday he saw cardiology.  Everything there looks stable, unchanged, but stable.  I'll take that.  Plus, we came up with some ideas for possibly improving the health of his heart and lungs with changing some vent settings, but that's going to take some coordination with pulmonology as well.  So that ball has been set in motion, and I hope it just keeps on rolling.  I have a dream that someday, somehow, Aaron will be free of the ventilator, and maybe even his oxygen tank.  That would be such a wonderful experience.  Not that they're bad.  Really, I'm truly grateful for them.  I just wish they weren't needed.

But today, he had some cancer screening tests, a VCUG (long unpronounceable name) to check his urinary reflux, and a urology visit.  The best news is that he has no masses or anything else on his kidneys or liver.  I know the chances are very small, but even so, in the days leading up to the tests, I'm on edge.  Not fun.

But in a very, very close second to that best news is that he has outgrown his reflux!  This reflux occurred because the valve at the top of the bladder is supposed to be one-way only, but his was floppy (kinda like a lot of other things about him?  Ear canals, airway . . .) and let the urine splash back up into the kidneys.  I was told that with a grade IV reflux (only scores to grade V), most kids will end up needing surgery around four or five years old to fix it.  But he's done it!  It's gone!!  He has been discharged from urology and will be discontinuing his daily antibiotics!  One less thing to remember, do, worry about.

I had my own challenge this week.  I've had a tooth that's been bothering me since my surgery.  I kept thinking maybe the sensitivity would just go away.  Yeah, right, I know.  But while I like the dentist as a person, I have a real fear of seeing him professionally.  So I put it off until I just couldn't any more.  Turns out that he had to drill out almost the whole tooth, AND my gum had actually grown into the cavity.  Yeah, owie!  It still is  tender back there.  But I just keep reminding myself that Aaron has endured much more pain with quite a bit of grace.  So I just keep plugging on (and eating soft foods).

On a sadder, more difficult note, our cocker spaniel, Daisy, will have to be put down tomorrow.  She started getting sick about two weeks ago and when we took her in, the vet thought it might be a systemic infection.  It turns out that instead, it's a very fast moving, aggressive cancer.  Deborah and the youngest boys especially are having a hard time with it.

And so as winter turns to spring, life moves on.  And we'll move on with it.


The day the Lord created hope
was probably the same day He created Spring.
~Bern Williams


Posted by CompatibleWithJoy at 12:11 PM