7:00 a.m.
Aaron didn’t start running a fever yesterday, but he slept a lot (not surprising since he was up most of the night) and I did get a nap with him.  But when we woke up, I tried to shift his body in his bed and he started sobbing again.  I figured that was enough.  It might not be much to worry about, but we needed to get some tests just to make sure.  That turned into a bit of a circus.

I called his ped, Dr. K, and asked for a chest x-ray, a urinary cath, some blood work and a viral panel (where they check for the most common respiratory illnesses: RSV, flu, rhinovirus, and a couple of others).  No problem.  He was more than happy to order them.  Except, we needed to stop at his office for the cath because the outpatient lab at Primarys at Riverton doesn’t do caths.  Okay, so another stop, oh well. 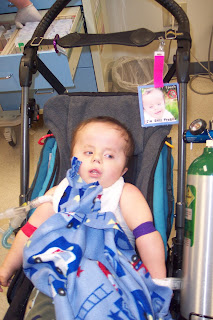 We get to Riverton and do the x-ray, no issues there, except there’s a significant patchy area in his lower right lung that I’m not used to seeing.  Go to the lab and find out that they don’t do viral panels there, but they can do his blood work.  Or maybe they can’t.  They’re only allowed two sticks before they have to stop, and Aaron wasn’t being cooperative.  So since we had to go over to the ER for his viral panel, we’ll do blood work there, too.  There are RNs and IV teams over there that have more options of where they’re allowed to stick and so on.

Over to the ER.  When we get there, we’re actually seen pretty quickly.  As the doc comes in to check on us and say “hi” I asked him about the x-ray.  It’s already been read and they’re reading pneumonia.  Yep, that patchy spot.  It’s decided that he needs to go up to the main campus for admission and the question is, by my car or by ambulance.  Since I don’t have anyone else with me and Aaron has been known to go bad pretty quickly, we decide ambulance is best.  It takes a while to get the blood work and they also want to start him on his antibiotics.

About 7:00, Aaron decides to show them what he can do.  He starts needing more and more oxygen.  Up until this point, I’m still a little confused at his behavior.  He’s very much right in the middle of his baseline oxygen needs.  No changes there at all.  That’s about to change.  He needs a little more, then a little more.  I let his nurse know that I would really like to be on our way as he’s starting to act up and I’d like to get there before he really struggles.  She gets the doc and Aaron decides he really likes his oxygen.  More please! 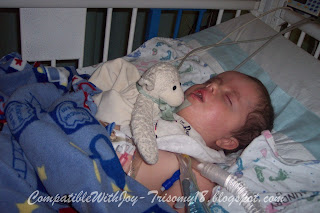 It’s decided that he’s going by chopper.  The pediatric team that was needed to go with us is in the air and on the way.  I have told that boy time and again that it’s only one ride per customer, and he’s had his!  Like the obedient child he is, he started to settle down.  When the pediatric team got there, they reassessed and decided that ground would be okay after all.  So we loaded and got on our way.

We’re currently sitting in the PICU.  He started running a fever again after we got here, but Tylenol helped out and he had a fairly restful night, was even down to two liters for a while.  But about 6:30, he wanted to show off again.  He was so sad and started desatting again.  He ended up in the 70’s and needed 10+ to come back up.  Gave him more Tylenol and suctioned some more and he’s settled down again.

Probably most telling is that he’s just not happy.  He has these big sad eyes, with his eyebrows furrowed.  I haven’t been able to get a smile.  They’ll round later this morning.   Last night, the docs here were thinking that it might be atelectasis, collapsed lung tissue, instead of pneumonia.  There is obviously more to it than that because of his fevers.  Not quite sure where this stay is going.  He’s on his home vent and home settings, but not quite stable on his oxygen.

Rounding
We’ve decided that he definitely needs to be observed in the hospital.  His demeanor and his varying oxygen needs just are too out of whack to release him.  But he’s also doing well enough that we can go to the floor.  So sometime today, probably this afternoon sometime, we’ll head up there.  And if he decides to go south again, the PICU is only a floor away.  Somehow it’s not nearly as hard emotionally to bounce back to the PICU as it is to bounce back to the hospital from home.


“A man is powerful on his knees.”
-Corrie Ten Boon
Posted by CompatibleWithJoy at 10:16 AM