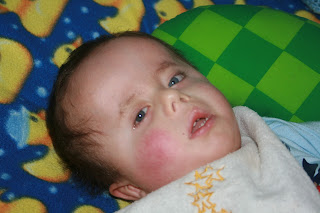 Aaron is sick.  How sick?  Good question.  But any "sick" is enough to give me a knot in my stomach.

Yesterday morning he was "off."  Nothing I could put a finger on.  Oxygen good, heart rate normal, but he wasn't his usual happy self.  And his night nurse said he'd been really tired, but couldn't get to sleep.

Then about 10:30 a.m., he started crying.  And crying. And crying.  My poor baby never cries without a really good reason.  Like a blood draw or IV stick that is taking forever to find the vein.  And then once it's over, he stops, pretty much just like that.  But yesterday, no amount of rocking and soothing would help.  He just sobbed.  For an HOUR.

Once he settled down and went back to sleep, I noticed his heart rate was up a bit.  Like up where it should be if he was working really hard in therapy.  But he wasn't.  He was asleep.  I took his temp and it was normal, but that higher heart rate kept me coming back each hour to take it again.  And sure enough, about 1:30, it shot up.

Now 101.2 may not seem like that high, but Aaron runs low.  His norm isn't 98.6.  It's 97.7.  And yes, we've taken it enough to know.  Plus, Aaron doesn't get fevers.  He's had four in his lifetime, and only one was very high.  He popped a high one following his trach and g-tube surgery.  We never did figure that one out.  He had a low-grade one when he had his only UTI.  Then with both of his pneumonias he had a mid-grade fever, kind of like the one yesterday.  See why I'm on edge?

Fortunately for Aaron, Tylenol sticks around a LOOOONG time for him.  Like a minimum of six hours but closer to eight to ten.  So he can be comfy for longer.  But again, about 9:00 last night, he was sad, oh so sad.  As I did his trach cares, I sat him up to fasten his ties.  And that triggered it.  This time it was Daddy who rocked him for the hour it took to calm him down.  When he was still crying even though he was asleep, we gave him Tylenol again, even though he wasn't running a fever at all.

This morning, he's sleeping quietly, peacefully.  And his heart rate is still down, and no fever.  But I've cleared my calendar.  I stayed up late to finish today's assignments and will be contacting the office about the kind of work I can do over the next few days.  They need to be jobs that I don't need a high-speed internet for, in case we do go up to our "vacation home."  As long as he stays happy and fever-free, we'll just cuddle and hang out today.  But if he struggles at all, if he hurts, if he gets another fever, we'll go in for labs and x-rays.  And of course it goes without saying that if his oxygen needs increase, we'll be out of here really fast.

So a plan has been made.  The hospital bag has been checked and restocked (yeah, one pair of underwear probably wasn't going to do it for me).  His medical history and papers have been updated, printed and put in the bag.  And we've had the "talk".  The one where I point out all the advantages of getting better quickly.  Like he can have all the rocking time with Dad that he wants.  And there will be no needle pokes or IVs here.  He's always tried so hard to be obedient and cooperative before.  Here's hoping it works again this time.


There is no medicine like hope, no incentive so great,
and no tonic so powerful
as expectation of something tomorrow.
- Orison Swett Marden

Posted by CompatibleWithJoy at 9:41 AM