It's been a busy week, but a good week. 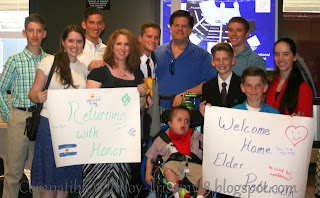 Jonathan came home from Argentina on Wednesday.  I did just fine until the screen said the plane had landed.  Then the tears started pricking my eyes.  By the time he came down the escalator, they started in earnest.  I held him for so long...  It's the first time in over 3 1/2 years all our children have been together. 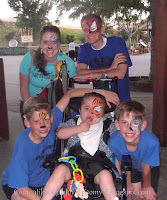 Then there was the usual of work schedules, soccer try-outs and various parties, play practice, marching band practice, and just "life" things.  Friday night we were able to go to Dream Nights at the Zoo.  It was so wonderful to see many friends OUTSIDE of the hospital having fun.

On the Aaron front, he's doing "okay."  We're maintaining outside of the hospital, but in large part that's due to the many "tools" I now have in the toolbox.  I was thinking this morning that it has even been a couple of days since we've had to "bag" him, or help him breathe.  Yeah, never should have let that thought come together.  About ten minutes later I had to do just that.  And he's been dicey since. Fun times.

But the past week some thoughts have been weighing heavy on my mind.  It's taken a while to percolate.

Last Sunday in the early morning hours when everyone else was asleep I was going through emails and texts and found one that came in several hours before.  It asked for prayers for a young man named Beau Richey who had been in a ATV accident.  He wasn't doing well.  The name was vaguely familiar, but I couldn't quite place him.  I started doing some looking around, and his face was also familiar.  It was when I searched my own computer that it came together.

In April, a scout group our family is heavily involved in put together an Eagle Scout Banquet honoring the young men who had achieved Eagle in 2015.  Part of the program involved an eagle, Freedom, and then pictures for each boy with the bird.  One of my jobs was photographer.

A young man came through the line fairly early.  He was wearing his scout shirt, but also a jacket over it.  I probably should have asked then if he wanted to take it off, but it was a busy night and I didn't.  Towards the end, his mom poked her head back in.  "Could we possibly do another picture, maybe without his jacket on?  And if it's a problem, no big deal."

I hesitated, at least in my mind, for a second.  I was beyond tired, exhausted, and ready to be done with the evening.  Freedom was hot, panting a little bit, and I'm sure his trainer was tired of holding him.  But what came out of my mouth was, "sure, why not."  I mean, it was only going to take another minute or two.

That young man was Beau Richey.  And he didn't survive his accident.  Shortly after I saw the text (and I still don't know who it came from), messages started coming out saying he hadn't made it.  I'm so, so glad I said, "sure, why not."  I'm grateful I could give that gift to his parents. 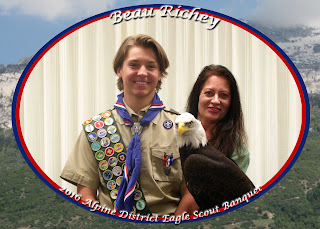 May you soar with the eagles, Beau.  I'm glad our paths crossed.


How wonderful it is that nobody need wait a single moment
before starting to improve the world.
~Anne Frank
Posted by CompatibleWithJoy at 1:59 PM