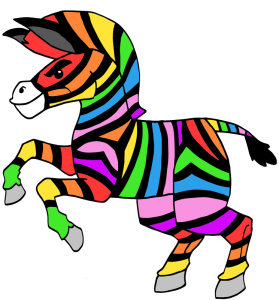 In the medical world, they tell you that when you hear hoofbeats, think horse not zebra.  Except my child is a zebra.  And not just any ol' zebra, he's a rainbow colored kind of zebra.  Yep, he's that rare.

And today he's really putting us through the paces.  He's needing a lot of oxygen, still.  And while we don't know exactly the whys behind it, when he's digesting food, he needs even more!  I can't remember if we bagged him once, twice or three times yesterday.  Today it was twice by noon.  Each time seems to have been in conjunction with a meal.  Otherwise he's looked good, in fact, fantastic.  He came in laughing, but on eight liters of oxygen.  He was all sorts of "helping" as they tried to hook him up to monitors.  He wanted to watch as they did an EKG and was fascinated by the printout.

They pulled a viral panel sample, a blood gas and chest x-rays as well.  All were perfect.  And yet, his oxygen needs climbed some more.  At one time he was on 12 liters although he's settled back down to ten.

So for now, we wait.  The prevailing thought right now is that his heart is acting up.  I'm grateful that at least we know he's got normal heart rhythms, but his pulmonary hypertension may be out of control.  Yes, again.  And worse.  The crazy part is that his heart rate is low, quite low for him.  As in, sometimes, occasionally when sound asleep we see it this low, but he's awake.  That bothers me.

Anyway, if we can rule out cardiac issues, or at least any new cardiac issues, we'll probably look at his digestive system.  He's never had any trouble there beyond the inability to get that "suck, swallow, breathe" sequence down.  But things may be changing.

One way or another, he's teaching us new things, still, again, always.  And here I thought school was out for the summer...


Rare is the union of beauty and purity.
Juvenal
Posted by CompatibleWithJoy at 9:52 PM