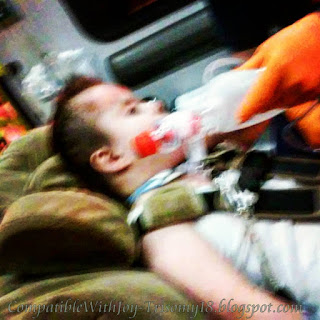 I'm going to try to make this coherent, but a serious lack of sleep and not a lot of concrete information may make it a challenge.

We're back, yep, up at Primary's.  Yes, again.  I mean, they're great and everything, but this is getting kinda old.  But here's how it all went down.

On Sunday I wrote that he was having digestive issues.  We'd stopped his food and were giving all kinds of medications, etc, to get things going again.  He was also incredibly high on his oxygen.  Prior to stopping his food, we were back to bagging him multiple times a day, always in conjunction with a meal.  Sunday evening, things finally started "moving" and we helped them along with an enema.  Monday morning, I did some more research into his formula, both the one he'd been on for about four years up until March and his new one.  They're very similar.  The new one is simply a reduced calorie version of the old, and we'd been diluting the old so much that the water to calorie ratio was the same.  Except as I did some digging, the nutrition is actually different in several areas.  I think that may be the cause of so many, many issues we've been dealing with for the last few months:  the asthma, the increased plugs, the increased oxygen needs, and now the mess with his gut.

I spoke with a developmental ped, Dr. M., at Primary's on Monday.  She wanted to add in yet a couple more things to help keep things going, and told me that since it sounded like he was well cleaned out, to go ahead and start his formula again, using half Pedialyte and half formula for 8-12 hours and then just formula. He was still on a lot of oxygen and she was concerned, but said that as long as we didn't end up bagging him too much and he looked and sounded good, we could stay home.  Sounded like a good plan to me.

Except, it wasn't.  We started with his 5 o'clock feeding and I almost threw in the towel with that one.  Once again, totally maxed out on what I could give him for oxygen and needing to be bagged.  At 8 o'clock, he was asleep and so he did pretty well with that meal.  We were even able to wean his oxygen a little bit.

Well, it turned out to be a late night with kids getting home from work and everything.  (Oh, and I'd had no nurse on Sunday night, so that was about four hours of interrupted sleep.)  By the time I got to bed it was just after midnight.  Aaron's nighttime feeding starts at midnight.  At 12:45 my phone rang.  The crazy ringtone that is only assigned to my nurses.  He wasn't doing well.  We'd also given him albuterol and he was still in the mid-80's.  So we bagged him, got him up to where he belonged, and I tried to go back to bed.  And the phone rang again at 1:19.  Now he was in the low 80's.  Not real great.

I came out again, we bagged again, and he took a little longer to respond.  I decided it wasn't going to work and started to throw together the things we needed.  He decided to fill his pants, a lot.  I thought maybe we were okay, and we settled in to watch for a little while.  But at 2:00, he started to slide again.  So we put in the call.

Our friends at Lone Peak Fire showed up to help us and we got up here about 3:00.   The guys on the floor decided they weren't comfortable with bagging him whenever he was eating, so we landed in the PICU just before 6:00 and I had a 9 o'clock meeting.  By the time we got report done and all settled, I decided that a shower was going to have to substitute for sleep and got going.  I made it through the training meeting and a committee meeting at lunchtime and came back and crashed, hard.

Aaron slept quite a bit today as well and was looking really good for a while.  They stopped all his  feedings while gathering information and studies.  Everything looks good, sounds good, except he needs a ton of oxygen.  About noon, they started feeding him again, 30 ml per hour.  That's two tablespoons per hour, not much.  And they go up by 5 ml (one teaspoon) every four of hours.  At this rate, it's going to take a while before he gets to where he doesn't need his IV.  He usually gets about 1450 ml/24 hours.  And now that he's awake, he's back to ten to 12 liters of the good stuff.

So I guess the moral of the story is, eat your dinner and don't complain, or you might end up in an ICU with almost nothing to eat at all.

Anyway, I know this is a bit disjointed, but the brain is still a bit rusty.  We don't know how long this is going to take, what is going to be the end result.  He's never had this trouble before so it's not like rhino, which I hate but know the timeline well.  But he's happy, very happy, and pulling on all his wires and tubes.  He's tucked into his tent bed that keeps him safe.  And there are a lot of people trying to figure things out.

One of my friends said to tell my silly boy that there are better ways to see an ambulance, they give free tours in the daytime. Yeah, we might have to try that sometime. Maybe when he's breathing better.

“Healing in a matter of time,
but it is sometimes also a matter of opportunity.”
~Hippocrates
Posted by CompatibleWithJoy at 7:56 PM