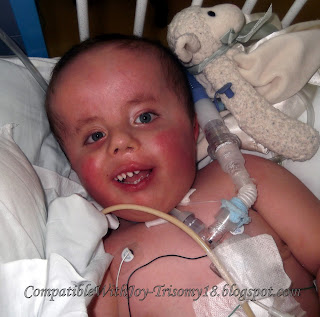 We're still moving in the right direction!  He needed a lot of oxygen last night when he made the jump to his vent, but he maintained through the night.  This morning, they even took the hospital vent out of his room!  (They had left it in here in case we needed to switch back.)  His blood gas, a measurment of how he was doing with oxygenation and also getting rid of his CO2, what we breathe out, was also great.

But he was on too much oxygen for the floor to feel comfortable taking him, so we've hung out in the PICU for another day.  Right now, he's on eight liters of oxygen, down from ten to 12 last night.  So still going the right way.  I probably shouldn't say this, may jinx ourselves, but we haven't had a bump yet, very unusual.  It may still be out there but it's looking less and less likely.

We've added in albuterol ("all-better-all") just in case that might make a difference.  Not sure yet, but maybe.  At least his heartrate hasn't gone up when he's gotten it.  That's usually a sign that he needs it.  See, albuterol raises the heartrate.  Except, if he's already working too hard and it makes breathing easier, it will actually lower his.  It's when he isn't working hard already that it increases.  So maybe... 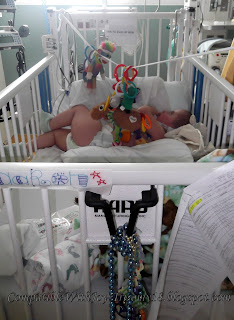 But anyway, how's he doing, Aaron, my monkey?  Yeah, he's doing just fine, if he does say so himself.  Take a look at his position in his bed.  When you're in the hospital, especially when you're in bed most/all of the time, they like to keep your head elevated.  It helps cut down on the risk of pneumonia.

Except here.  It's been more than two minutes (but less than five) since his nurse repositioned him.  So yep, he's sideways, with his legs sticking out, chewing on that pillow that he's supposed to be propped up on.  He's feeling pretty good.

I'm not sure when we'll get out of here. He needs to be on three liters or less for 24 hours for that to happen. It won't be tomorrow, and maybe not Tuesday either. But it's coming.  And we are so grateful for all the prayers and faith and skills of those who take care of him who will make it possible.


Adopt the pace of nature: her secret is patience.
~Ralph Waldo Emerson
Posted by CompatibleWithJoy at 5:36 PM