Everything in the Mouth 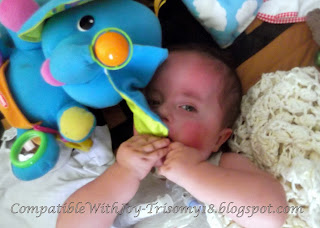 Many special needs kids have what's called an "oral aversion."  Yeah, big name (tend to find those in the medical field) for "don't you dare put anything near my mouth!"  Um, not Aaron.

I think it happens because for those in the hospital, oral suctioning (yeah, what your dentist does, wonder why we hate the dentist?) happens a lot, a whole lot.  It makes sense, especially for little ones.  I mean, you really don't want all that saliva, spit-up, whatever, ending up in the lungs.  So they suction it out. 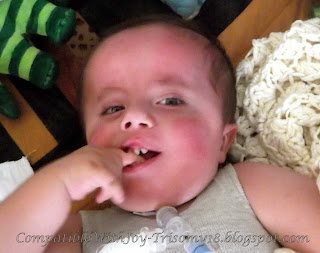 But Aaron was different.  He was only in the hospital for two weeks and two days.  And when he got home, we had a suction machine, but it was usually in the other room.  So I did with him what I did with my other babies.  You know, the ones that didn't have a ton of medical equipment.  The ones that had me, some diapers, and a burp cloth (or hand towel in the case of some).  When he spit up or drooled, we just mopped him out.

So Aaron does what any normal baby does.  If he can get a hold of it, it goes in the mouth!  Tubes, wires, toys, bibs, pillows, anything and everything!  At one time during his last hospital stay, he had his IV in his left hand.  He even tried to get the locked end of that into his mouth! 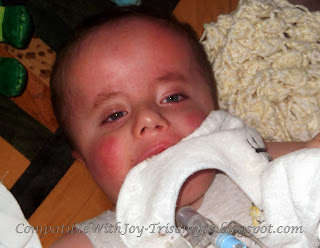 On the topic of his last hospital stay, he's still getting better.  I'm on the fence about whether or not he goes to school tomorrow.  I think we may just take the rest of the week off and start fresh next week.  But he's improving every day!


Here's what it was this morning, some of it.  What you don't see is his pulse/ox cord (trying to convince him that chewing on electrical wires is a bad idea), the blanket, and his feeding tube.  I've also tried telling him that he doesn't eat that way.  But that's okay.  It's another way for him to explore his world.


“Equipped with his five senses,
man explores the universe around him
and calls the adventure Science.”
― Edwin Hubble

Posted by CompatibleWithJoy at 12:35 PM