How to Win Friends, Influence People, and Keep your Customers 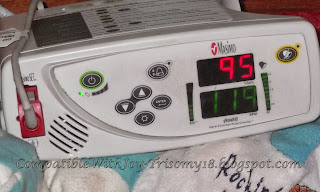 Today started off with a bit of a bump.  Aaron had a pretty good night.  I warned his nurse last night that one of his pulse/ox probes (the disposable part that's often finicky) was acting up.  It was occasionally saying "bad sensor" but other times would read just fine.  Overnight, she had no issue with it at all.

This morning, as I was getting him ready for school (he was SOOO excited!) I was changing the cord from one foot to the other.  "Bad Sensor."  (Yeah, bad, bad sensor, behave yourself!)  So I switched it back.  Still "bad sensor."  Got a new one probe sensor out.  Guess what?  You got it.  "Bad sensor."  Um, maybe it's not the sensor?  Maybe it's you, machine.

So I made the phone call.  And got a machine.  Called another number, got a machine again.  Um, yeah, I can leave a message, but what guarantee do I have that anyone will hear it anytime soon?  I mean, I don't know how many messages have been left and when they'll get around to it.  Called a third number, and this time I get a person.  She can't find anyone, and also offers to have me leave a voicemail.  I didn't think that was going to work.  I'd already left two.

And here's my thing (or things, maybe).  Aaron NEEDS to stay within his optimal oxygen saturation rate.  Actually, we all do.  But due to his somewhat funky makeup, he can be all over the place.  That's why he has the machine, to make sure we titrate his oxygen to his needs.  And not being in that optimal range, and not fixing it, well, I'm tired of being at the hospital.  And even worse would be not ever needing to be there again.  So it's kinda important that we have working equipment.

And we're talking about life support equipment.  Life support, yeah, the stuff that supports life.  And no matter how much science is getting excited about creating life, well, really, it's still one to a customer.  So it's not a 9-5, Monday through Friday kinda thing.  There should be (and I know from previous experience there has been) always, ALWAYS, someone available.

So here we go, about 7:15 a.m., and nobody can be found who can help us.  I have to admit, I got pretty irritated.  Frankly, they probably don't pay her enough to listen to my lectures.  But she did, and very nicely, too.  But the long and short was, the office didn't open until 8.  And she did try to find someone.  Somehow, after we hung up, she did find someone.  Because that someone called me at 7:45 (yep, office not open yet) to let me know she was working on an exchange ticket.

At 8:05, the first person called me back to find out if anyone had been in touch with me.  Now THAT is customer relations.  She didn't have to.  She did her job (and then some) by listening to me complain and then taking the message.

Very shortly after that, our respiratory therapist called about it, too.  And when I explained what had happened not only to the machine, but also that morning, HE got on top of things as well.  He called me back again a little bit later to see if I could help him out with the timeline, because he was now spending time trying to find the breakdown in communication and fix it so it wouldn't happen again.

I've heard that in business, it takes ten very satisfied customers to make up for one disgruntled one.  It makes sense because as humans, we're much more likely to tattle on the bad times than we are to share the good ones.  Well, I have to say that IHC Homecare has taken very good care of Aaron from the beginning, the very first time he came home from the hospital.  And there have been a couple of glitches, but they're minor.  And what really matters to me, is that they take the glitches and look into them, and work hard to fix them.

They've got my back, and they've got Aaron's back.  And I couldn't ask for more.

Customer service is not a department, it’s everyone’s job.
Anonymous
Posted by CompatibleWithJoy at 2:35 PM