Head to a Picnic, Land in the PICU

Yeah, that title kinda sums it up.  I think Aaron got his P's mixed up.  Yesterday was the annual local SOFT picnic.  It's something I look forward to all year.  And Aaron was doing pretty well.  He was tired, but he's been playing the "play at night, try to sleep during the day" game.  And he's been in school, too.  I tried to tell him that sleeping in class wasn't a good idea.  The kid thinks he's a teenager.  But it was crazy fast how things have played out.  As best I can remember, here's the way it happened.

Friday night, we were at Grandma's house for a movie night.  Aaron was pretty tired (see the above) but he did okay.  He did start crying a little bit during the movie, but I held him and comforted him and he settled down pretty good.  Saturday morning found us at Matthew & Joseph's soccer game.  Again, tired from being up all night and towards the end of the game, a little sad.  But he'd had a lot of clear stuff running out of his nose and I got tired of wiping it, so I suctioned it out a bit.  He enjoyed that every bit as much as you can imagine any other three-year-old would.  So he cried.

Saturday at noon, we loaded up to go to the picnic.  Because life is crazy in our home, Aaron, Joseph and Andrew were the only ones that were able to go with me.  And Aaron was excited!  Lots of smiles and wiggles.  But by the time we got there, not so much.  In fact, he spent most of the picnic either sleeping or sad.  And that nose, well, it was running a whole lot more and starting to turn yellow (too much info?).

We were almost all the way to Primary's at the time, so I debated about whether to take him in for some labs and a check before heading home or not.  Finally I decided that I was still just too on edge from our last bout and wanted to be sure.  Turns out it was a really good choice.  So I hauled Andrew and Joseph out of the pool and we took off.  I was also hoping that it was early enough in the day that it wouldn't take too long to get things done.  I was WRONG.

We got to PCMC just before 4 p.m. and it was busier than I've seen it before.  Not that there were many there, but it has a huge emergency department, and you rarely (or I rarely) wait long at all in the waiting room, or see others there.  But this time there were five or six of us waiting, and then when we got back, there was a lot more waiting going on.

No fever, heart rate slightly elevated, still lots of boogers in the nose, nothing from the trach.  They weren't quite sure what to do with us, and even after the chest x-ray (normal Aaron) and CBC, it wasn't for sure.  His white blood count was up, but not by much.  And his CRP (stress measure) was totally normal, not just for him, it was practically non-existent.  Blood gas also looked good.

But we did have an incident in getting the x-ray.  He started desatting (amazing how fast the room can fill when a kid of mine opens the door and says, "he's desatting and it's real and we need help) and we ended up bagging him for a few minutes.  That did sway them towards staying, but it was still a big iffy. 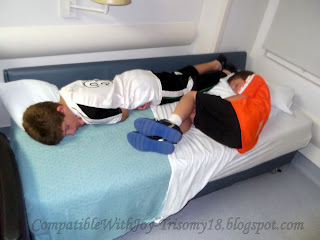 Then Aaron decided to take matters into his own hands.  He wanted six liters of oxygen, not five, not five and a half.  Six, minimum.  Plus, he started running a fever and we started pulling all sorts of nasty junk out of his trach.  First time we'd seen it.  So then it was, PICU or floor.  After a lot more discussion (the boys had time to watch football during BYU's rain delay plus the whole BYU game) and a blood gas, the floor was acceptable.  And so up we went.

By then, it was just after midnight and the boys were exhausted!  So they crashed on my bed.  Andrew had actually fallen asleep in the chair in the emergency department, and he really didn't wake up walking to the car later.  I kinda wonder if he'll even remember being in the room.

By the time we finished going over his history and meds and what-all, it was about 2:30 a.m.  I fell asleep quickly, but realized shortly after that I was hearing voices, several voices, and something didn't seem quite right about it.  As I fought to come to consciousness, I realized there were several people in the room.  It was about 3:30 a.m. and they were bagging him and then trying to go back on the vent.  And he was now at 12 liters and struggling with 80's for his sats.  Without the bagging and 12 liters, he was in the mid-70's. Plus, the fever he'd started at 38.6 (101.5) had gone up to 39.7 (103.5) and his heart rate was way up, too.

Yeah, that one earned him a quick trip downstairs, really pretty quick, and with a full entourage.  I'm not even sure who all was there, but I know the attending, his nurse, I think the charge nurse, and at least two RTs were involved.  Plus, by then it was 15 liters of oxygen.  Even the trip in the elevator, one floor down, was a bit dicey.  I don't even want to think about if we hadn't come in earlier.

This morning, he's sleeping fairly peacefully.  He's on the PICU ventilator because it let's us give him more oxygen.  He was on 100% O2 but has weaned down to about 70% now.  His fever has broken, for now, and we're not seeing as much junk from his nose and trach.  But he's not out of the woods.  What initially looked like maybe we'd be watching for a day or so may now be a much longer process.

PLEASE, if you are sick, even if it's not "that bad," PLEASE don't spread your germs.  PLEASE, stay home.  There are those who say, "but it will strengthen the immune system to be exposed."  Yeah, so let's all get together and have a smallpox party.  It's well-known that those who survived smallpox never got it again, but there was the small detail of survival.  And those "simple bugs" can be just as deadly to someone who is already struggling, with cancer, with an auto-immune disorder, or with a fragile system for any reason.

As we transfered to the PICU, it took a few minutes for the staff to gather everything needed to make the trip safely. I took a moment and updated the facebook pages.  I cannot tell you how much it meant to me to see all the prayers for him that poured in from around the world, mostly from other moms who understand how this one plays out.  It is so comforting to know that the power of Heaven is being called down for our little man.  It buoys up the spirit and lifts the heart.


Hear my prayer, O God; give ear to the words of my mouth.
Psalms 54.2
Posted by CompatibleWithJoy at 9:23 AM