It's been a very busy week around here.

Joseph started homeschooling part time.  It's going pretty well so far.  His books all came on Friday and he's really excited about the material.  Here's hoping it continues that way.  So far, I'm loving the extra time we get to spend together.

On Thursday, Aaron went for a visit with General Surgery about his g-tube sore.  Of course, right now it's looking as good as it ever has been!  But he did get a chance to meet another surgeon and win her over.  (His original surgeon is now practicing at another hospital.)  Then we stopped in to see one of his buddies.  Little Paxton is missing a chromosome, is about two months younger and only lives a couple of miles from us.  We're thinking the two of them got together in heaven before they came and decided to have a party.  They're quite similar in the challenges they face. 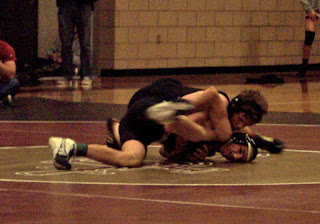 Friday found him cheering for his brother at a wrestling match.  It was a hard fought battle and Aaron made his presence known by stretching and wiggling all the way through Jonathan's match so he could set off his alarms.  I don't think he alarmed much at all, except when his brother was wrestling

Saturday was Primary Children's Medical Center's surgical open house.  Every two years they open the OR wing to the public.  The kids get to check out the whole place, making play-do teeth, checking out neurosurgery, and even doing an "appendectomy."  It was really cool! 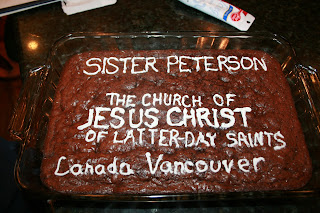 But the highlight of the week was Wednesday.  Mary's mission call came!  She's going to be serving in the Canada Vancouver Mission and leaves for the MTC (missionary training center) on April 3rd.  The mission actually covers most of British Columbia.  She will have a great chance to see a lot of beautiful places.  There's a link to her blog (her dad called her his MissionMary many years ago) on the left side. Right now, it's just a couple of pictures and the video of her opening her call.  We are all so excited for her!

Missionary:  (n)  Someone who leaves their family for a short time that others may be with their families for eternity.

Posted by CompatibleWithJoy at 11:21 AM