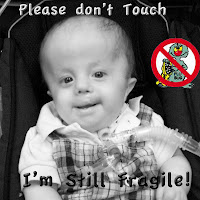 Yes, we're still in PICU, and yes, he's still really strugling. The good news is that last night about ten minutes before 5:00, we saw a smile,a few of them in fact. The bad news is we hadn't seen any since before we'd left home more than 24 hours earlier, and they've been in really short supply today. Yeah, he's still that sick.

We do have a diagnosis though. It's rhinovirus, the common cold. You know the one that makes your nose run and your lungs cough and you basically feel really miserable and tell people you feel like you're dying. Well the difference here is that it really can kill him. Right now he's still on a TON of oxygen, like occasionally we can get away with 75%, but mostly it's still between 90 and 100%. And he's getting breathing treatments every few hours to help his lungs stay open. And he's on the hospital vent instead of ours because it's just that much more sophisticated.

So where's this going? You know the cute sign that hangs on his stroller that says, "Don't Touch"? That's exactly what it means. And it really does mean everyone. See, I know you're not sick, and you haven't been for a while, but was the person who sat where you did before you? Was there someone with a nasty cough who held that book or opened the door before you? At our house, and away, we use a lot of sanitizer. Did you before you reached out to him? And he's also gotten used to our germs. He doesn't know yours yet.

He loves to get out of the house.  He loves to see people.  But the fact is that if people can't keep from touching him, he has to stay home.  We have to try to keep him safe.

So when the sign says "Please don't touch" that's exactly what it means. Don't touch the baby. You really could break him, and all the PICU nurses and doctors may not be able to fix him again.
Posted by CompatibleWithJoy at 8:42 PM