A Challenge, or Two? 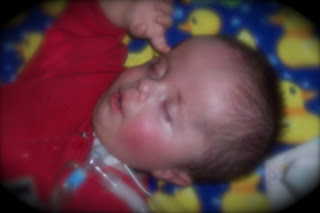 This will of necessity be short.  I have to stop before my shoulder seizes up on me again, but I wanted to let people know where we are:  at home!  Yea!  Still at home.  It looks like maybe we've weathered a General Conference without going in.  No, General Conference itself doesn't have anything to do with Aaron being sick.  It just seems that each time it rolls around we're either already in, or heading in.  Not this time!

Our big challenge right now is my challenge.  I tripped mid-February over one of his cords and injured my shoulder, my right shoulder.  It would start to feel better and then I would stress it again.  I put off going in, hoping it would fix itself.  No such luck.  A week ago it hurt so bad that I finally took myself to an after-hours clinic.  The doctor diagnosed tendonitis and sent me for physical therapy and medication.  Between the two, the weekend was actually almost comfortable.

But then on Monday, I finally got around to lowering several sets of ears (cutting boys' hair).  Yeah, probably not a good thing.  Working has also stressed the muscle and tendon.  I had been on half-loads at work, but by Tuesday, even that was too much.  When I tried to go to physical therapy, I couldn't even reach forward to put the key in the ignition with my right arm.  So now I've had to take time off work as well.

Anyway, it is improving, slowly.  I'm hoping that by next week I can be back on half-work and then full-work by the following week.

The second challenge is that Aaron may be starting to brew something.  He's been so cheerful and happy, and working so hard with his therapies.  But today he's not done as well.  He's been more tired, more junky sounding, and had a LOT of tummy bubbles.  And oh yeah, we've had "bucket patrol" since Saturday in a couple of the kids' rooms.  So here's hoping that it's just a tiny bump, and that he gets over it quickly.  Because not only do I NOT want to visit his "vacation home" north of here, I really don't want to try to do it one-armed.  So, please, keep us in your prayers.  I know you already do.

By the way, I think I enjoyed General Conference more than I ever have before.  I started a blog post on it and there are lots of thoughts to follow.  I just can't type very long at all before it hurts too much to go on.
Posted by CompatibleWithJoy at 8:48 PM