24 Hours in the PICU 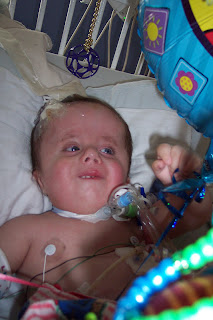 I decided to record what happens over a 24 hour period in the PICU because I think I would be curious, at least if I didn't experience it so often.  Maybe you're not, but it's also a record of Aaron's life.  And I so very much feel the need to document it.  This was 24 hours starting at 6 a.m. on April 23rd, and it's a fairly typical day as far as those go.

I wake to whispers and at least two people (turns out to be three) in the room.  Ask how he's doing and it turns out he's lost his IV, the one that was just placed yesterday.  It clotted off in spite of the slow fluids we had going to prevent that.  Usually, he keeps his IVs for a long time, but I guess not this one.  He has to have another because he's in the PICU and they may need access quickly.  And it's just good sense to get one anyway because he's a really hard stick and it's just better to be safe than sorry.

Five pokes and two IV teams later we have another scalp IV.  It's the second in his head for this stay with three in his feet in between.  It takes almost until the 7:00 a.m. shift change to get it in.  I've lost count of the total number of pokes he's had, but I know we've tried multiple times for feet and hands and once in the scalp that didn't pan out.

Shift change.  We've had the same nurse at night the past few nights but now she's off for a few days.  R has been awesome with him and I've really enjoyed getting to know her.  She said Aaron had a really good night.  They played, he laughed.  She gave him a bath around 4:00 a.m. and then he fell asleep -- right about the time the IV decided to quit.  He had started getting uncomfortable earlier, around midnight, so rather than wait for the fever, he got Tylenol and Motrin to head it off.

Aaron was finally asleep as I left to get my shower during the shift change.  Poor baby is such a hard stick.  But he did keep his sats up during the whole sad experience.  That's a good sign.

I came back in and Aaron is trying to sleep through his morning assessment.  He just got all his morning meds and is starting home bolus feeds again.  His last one was last Tuesday afternoon just before we called the ambulance.  He was NPO (literally "nothing by mouth" but in his case it's g-tube) from Tuesday through Friday morning.  He's been on continuous, 24 hour slow feeds since then.  His fluid output has been quite low, even with Lasix.

The respiratory therapist (RT) comes in to check him, listen, and do therapy.  He sounds a little wheezy so he gave him six puffs of albuterol and started CPT (Chest Physio Therapy) with a pneumatic percussor.  Just before he arrived, Aaron desatted to the mid 80's.  I checked his cuff, inflated it to 2 cc of air and listened prior to suctioning.  Also, I cheated and gave him some O2 suction (a burst of oxygen) on the vent.  I'm really not supposed to touch the vent.  The RT walked in as I was finishing listening so I didn't suction but turned it over to him.  Aaron loves CPT.  He acts like he's enjoying a spa treatment.

Everyone went over all of Aaron's meds, treatments, feeds, and studies.  Repeat labs came back positive for rhinovirus again (surprise!).  Also he's holding onto a lot of fluids so we're scheduling Lasix.  If his fevers continue, they'll get ENT involved to check his ears and sooner rather than later.  He'll stay on nitric oxide until he's using less than 50% FiO2 (oxygen that's bled into the ventilator -- just measured in percentages instead of liters like on our home vent -- about 5+ liters).  Then weaning off the nitric is a two day process.

Aaron's sleeping peacefully and I'm reading through people's comments on Facebook and the blog about him.  It is so comforting and strengthening to know so many are praying for us.  He's having a little trouble keeping those sats up right now and his heart rate is climbing a bit.  Wonder if a fever is coming on.

Sats are starting to dip but no fever yet.  It may be in part that he's not breathing as deeply when asleep.  And he is OUT!  Increase FiO2 from 65 % to 70%.

Sats are still 88-90% -- still sleeping.  Rainbow Kids team just stopped by to see if we needed anything.  They'll pray for him, too.  It was a nice visit.  It's also time for another feeding. He seems to like having a full tummy.  I wonder why.  We're also going to hold off on Tylenol and Motrin unless he spikes a high fever because we're trying to see if he's really trying to fight off some bacteria.  His trach aspirate (think throat culture, like a strep test, but in the trach) is starting to grow out some bugs.  But we won't know what they are or how much for a few days.  And we know he's been colonized with a few different ones for quite a while.  We're all thinking that his current lower sats are because he's sleeping deeply and not breathing as deep.

Aaron still sleeps, but tones have sounded in the unit.  They're different in here than in the rest of the hospital.  It's a gentle ding-ding tone in here.  But when they sound, everyone stops.  It's the code alarm.  Someone's coding, lungs stopped, heart stopped, or dangerously close to stopping.  And I've learned that medical personnel geneally don't run.  Paramedics, doctors, nurses -- they move quickly and with a purpose, but they don't run.  Except for when those tones sound.  Then they run.  Everyone's down at the other end of the unit now.  I pray the child will be okay.  See, when they're expecting, planning for a child to pass no tones sound.  No code is called.  A butterfly is placed on the door.

The PICU is not a quiet unit.  It's busy, crowded.  There's a lot of talking, laughing, joking.  But it gets really quiet in the aftermath of a code.  Almost as if everyone not actively involved is holding their breath, praying.

The noise is back, some laughter, almost a nervous feel to it.  but I do see some smiles.  I hope that means the immediate danger is over.  Aaron is now on 80% FiO2.  Still sleeping, but at the moment he's at 93-94% oxygen saturation.  That's a pretty good spot for him. 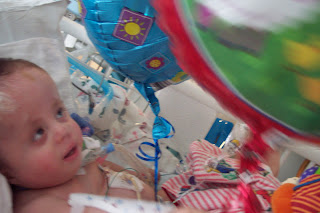 I stepped out to grab lunch and update Aaron's blog.  The Parent Resource Center is such a help.

Came back after lunch to find some cute balloons and a sweet note with a magazine from another mom who's been (and still is!) in the trenches.  Her little hero is a few years older than Aaron and has some similar challenges with his airway.  She "gets it," she really does.  And it will be so fun for Aaron to play with the balloons when he wakes up.  What a fun surprise for both of us. 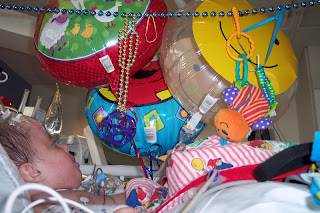 He's still sleeping, still on 80% FiO2.  As I stepped out, the RT was here again doing CPT and he was just hanging out, totally relaxed.  While I was gone, Wound Care came by.  He still has a nasty sore by his g-tube.  So we'll try some more ointment for a day or two and if it doesn't improve, move to a higher level of care with it.

I decided to lie down for a nap since Aaron is sleeping, too.  Twenty minutes later, he stretches and knocks off his ballard.  Oops.

Aaron knocks his circuit open again in a different place with strong coughing.  I didn't hear the wind, so I didn't move that fast and the nurse covering for his nurse (she was at lunch) wasn't right bedside either.  He desatted to the upper 70's and was MAD!  FiO2 to 100 %, blow-by oxygen and a little suctioning and he eventually calmed down.  And went back to sleep.  I got to talk to the nurse about T18, survival rates, and how hospitals and doctors can and DO influence these.

I'll finish this tomorrow.  I didn't realize how long this is going on.  We're seeing some improvement today.  They've put him on some breathing treatments that are pulling a lot of junk out of him.  Hopefully, he starts processing the oxygen better.

He's having a TON of fun playing with those balloons.  And I think we might be seeing a tiny bit more improvement.  Tincture of time seems to be what he needs.  He's now on day nine of his virus...

Playing with the balloons
his friend P. sent him.

Posted by CompatibleWithJoy at 12:36 PM