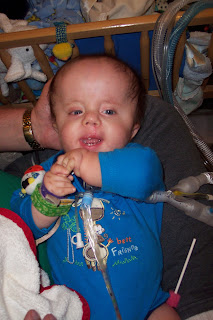 We're Home!!!!  So nice to be back.  Aaron obviously agrees.  What you can't see is the way he snuggled into his bed and fell fast asleep almost as soon as we got here.
Yesterday, we did a little more labs work-up and decided that he was fluid low, or dehydrated.  He had gotten a couple of fluid boluses through IV and he got another one last night.  Each one helped just a little with his heart rate.

I went to sleep last night praying that if there was something else, something we were missing, we would find it this morning.  I know so many others were praying for him as well.  As I went to sleep, I wondered if it might  be worth it to have pulmonolgy get involved.  This morning, I remembered something else. 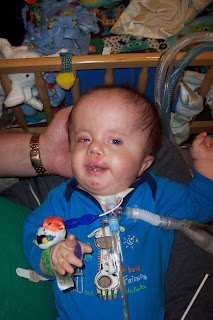 Since early last December when we found vent settings that worked for him, he has done very, very well on those settings, until something stressed him. It had to be a major stress, because all those little tracheitis infections didn't bother him at all.  But he was sailing along, until he got pneumonia.  After pneumonia, he couldn't tollerate those settings and had to be increased.  Then, after his lip surgery I started seeing some signs that he needed more support.  The day that his lip started to swell, I called up to the hospital and got permission to increase his settings a little more.  Again, his body had been stressed.  Well, this was a big stress.  Not only did he have surgery, but he still has the pins in his feet and his tendons have been clipped.  We talked to the respiratory therapist and increased his settings about mid-day.  Guess what!  He's been MUCH happier. 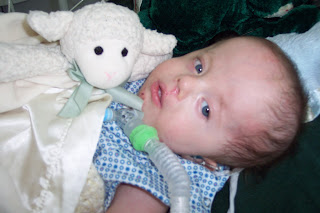 Yesterday, William coaxed a smile out of him, but it was a lot of hard work.  Today, he and I had a wonderful time playing before we left.  And when Deborah got to the hospital, he couldn't have been more thrilled.

Long and short, I'm so thankful for answered prayers, both mine and everyone else's.  I'm thankful for caring doctors who go the extra mile to try to help us.  And I'm grateful to be home.  Probably almost as thankful as Aaron is. 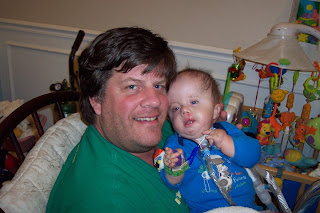 If you think my hands are full, you should see my heart.
Posted by CompatibleWithJoy at 9:42 PM