It's been a busy week around here.  We started at Shriners Hospital on Monday.  The plan was to get casts put on Aaron's feet in an effort to straighten them out.  I took Michael and Joseph along so they could play in the play area after we were done.  When we got there, they were excited to see Alvin and the Chipmunks in the lobby.  Joseph even noticed that the chipmunks eyes matched their shirts! 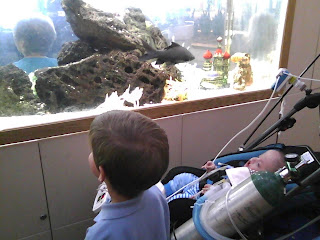 There was a big fish tank and Michael and Aaron were fascinated with the fish swimming around.  There was a catfish that was a little aggressive and they felt like he needed a time-out.
However, the appointment itself turned out to be a bit of a disappointment.  We were there for two hours and had his feet photographed and measured.  We went over his medical history and everything else.  The doctor spoke frankly with me about the likelihood of success with the casting.  Apparently success rates are very high when the malformation is because of positioning in the womb.  However, when it is related to a disorder, usually surgery is needed to install pins in order for correction to be permanent.  In Aaron's case, the benefits of surgery are outweighed by the risks of it.  It is unlikely that he will walk well anyway, and his feet are not severe enough to prevent walking if they are not corrected.  So we will try casting but not surgery.  His particular deformity is called a vertical talus.  Usually the talus sits horizontally and the feet bones go forward off of it.  However, Aaron's talus bones are vertical (thus the name), which causes his tendons to be extra tight and  bring his feet up and out.
That, however not encouraging, was not the disappointing part.  Just as they began wrapping his left leg, the doctor looked at me and asked, "When is his surgery for his lip?"  "Two weeks."  "Two weeks?" and she looked at him and looked back at me and said, "I can't cast him."  Turns out you really can't go into surgery with casts on.  It makes sense.  They will be giving him extra fluids and he will have swelling.  They'll also want access for IVs.  In the doctor's words, his surgeons would "freak out if he showed up with casts!" But how frustrating to waste all that time.  When we originally spoke about casting during the summer, he was going to have his surgery in April.  Now we're scheduled for casts on August 1st.
But Joseph (remember the last post) managed to get his cast on Tuesday.  So one out of three casts were accomplished.  And Joseph's will come off about the time Aaron gets his one.  We'll be going up to Shriners once a week for a few weeks while we see if there is any improvement. 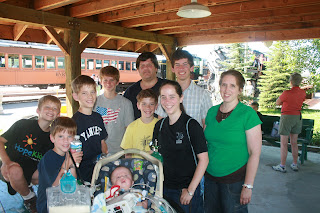 Then Tuesday evening we packed up everything (and I mean EVERYTHING) and went to Heber for a family reunion with William's family.  Aaron's stuff took up the whole back of the van (it's large!) and everyone else's went on the back bench.  We had a great time.  Unfortunately, I didn't manage to take many pictures.  In fact, the only ones I got were on the Heber Creeper train ride.  It's an old-fashioned train that winds down through Provo canyon and back again.  Aaron really seemed to enjoy the breeze in his hair.
Some of the older kids were sitting just across from us.  Thanks to Deborah for "babysitting" Aaron's extra oxygen tank. 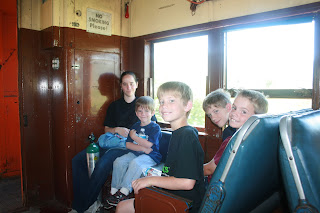 We also got held up in Soldiers Hollow.  Bandits came riding out of the hills looking for the money box.  Turned out there was only a stuffed duck in it.  Aaron stared down those bad guys without even blinking. 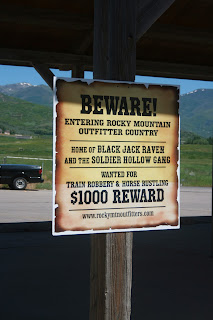 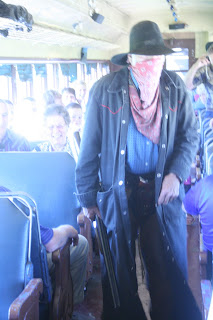 We had a great time with everyone.  I'm just hoping some of the others who took a bunch of pictures will get them to me.  We're back home now and hoping for a peaceful night.  However, it looks like we may be chasing oxygen.  We were about 800 feet higher than we are at home and it turns out that it takes about 24 hours after a change for the lungs to fully adjust.  So our first 24 hours in Heber, Aaron looked great on home settings.  After that, he was requiring much more oxygen.  I spoke with Chris Hartling at PCMC and she said that was completely normal.  And that it would take 24+ hours once we got home to stabilize again.  And all afternoon it's been too high or too low.  We're having an awful time finding his happy spot....
Posted by CompatibleWithJoy at 9:28 PM