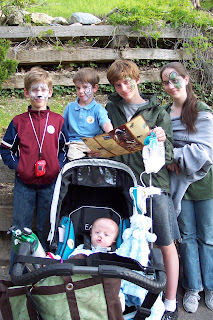 I am beginning to get giddy.  I can't believe he's almost one!!  I look back at some of the more scary moments, and am so grateful for where we are.  On his one week birthday, I fell apart.  He had this very tired, old look in his eyes.  I kept telling him I needed him to keep working.  We needed him.  Thanks to a wonderful respiratory therapist at UVRMC, he pulled through.  On Thanksgiving, I worried that he might not see Christmas.  Thanks to our wonderful night nurse, the local paramedics, and LifeFlight, he survived that too.  Then in February, when he had pneumonia, I told him we still had things to do.  He needed to get his cool wheelchair, go to baseball games, and have his birthday party.  Again, the fantastic staff at PCMC in the PICU helped so much.  And now he's turning ONE!!!!


We've had a fantastic week so far.  Friday night, I took Aaron and some of the kids to the zoo for DreamNights.  We had a fun time there, although I did draw the line at getting Aaron's face painted.

Last Saturday, Andrew was baptized.  It was a wonderful experience.  And Aaron got to be there with us.

Then yesterday was a marathon medical day.  Once every three months we go up to PCMC for a coordinated care visit.  We see pulmonology, ENT, respiratory, and a special needs pediatrician.  They all gave Aaron gold stars!  He is doing so incredibly well!  He's 14 1/2 pounds now which is only about 3-4 pounds lighter than his siblings were at 1 year.  Not bad for a kid who wasn't supposed to grow and thrive.

We also got to see another little boy who lives down the road from us.  Parker has Down's Syndrome and his trached as well.  I've followed his blog Praying for Parker and enjoyed his mom's comments and loved watching his smile.  He was there at the clinic at the same time and it was so much fun to meet them and talk to them.

Our doctors at the hospital are so invested in Aaron.  Dr. Marta King was his doctor on the floor yesterday.  We were admitted to do a pH study.  It involves putting a tube down his nose into his esophagus to measure if there is stomach acid being refluxed into the esophagus (not a good thing).  Anyway, once the tube is placed, we just hang out for 24 hours.  Then early next week we'll get the results.  But we weren't doing anything else.  So Dr King asked when our next echo and cardio consult were.  Turns out we're scheduled for next week.  So she made some calls and we got both the echo and the consult yesterday.  They even did the echo bedside, Bonus!

Then Dr Menon, cardiology, came in.  Aaron still has pulmonary hypertension (big surprise) BUT the right side of his heart is not as thick as before.  That is a VERY good thing.  It means his heart is not only not working as hard, but it's resting enough to begin to undo the damage done earlier.  And his VSD and ASD are also very small.  He said that they are small enough that he doesn't think they will need repairing.  He was also very kind in inquiring about whether we were getting the care we needed.

I am so grateful (I know I keep saying this) for all the help we receive from the medical world.  Dr. Menon, Chris Hartling, RT, his special needs ped Dr. Murphy, and the head nurse on the floor were all asking if there was anything else that we needed, if there was anything they were or weren't doing that I wanted changed.  Dr. Menon especially was asking about whether I felt Aaron was getting the medical care he needed from other doctors.  I had to tell them that I feel like Aaron is a priority for all that he comes in contact with.  I think he touches them with his special spirit and they feel it, because everyone seems to go out of their way to help him.  One of our home nurses, Jill, also works at PCMC and she came by our room while we were there, just to say, "hi."  Aaron loved seeing her.

It was also good to be up there with him when he's feeling well.  I loved being able to show the staff what he's really like.  So often they only see him when he's sick and needing help.  They don't get to see our happy, smiley, playful baby.

And in three more days, it's PARTY TIME!!!  You're all invited.  Bring some balloons and enjoy cake with us!
Posted by CompatibleWithJoy at 1:19 PM