Fun With Trachs, or All I Want for Christmas is WHAT?? 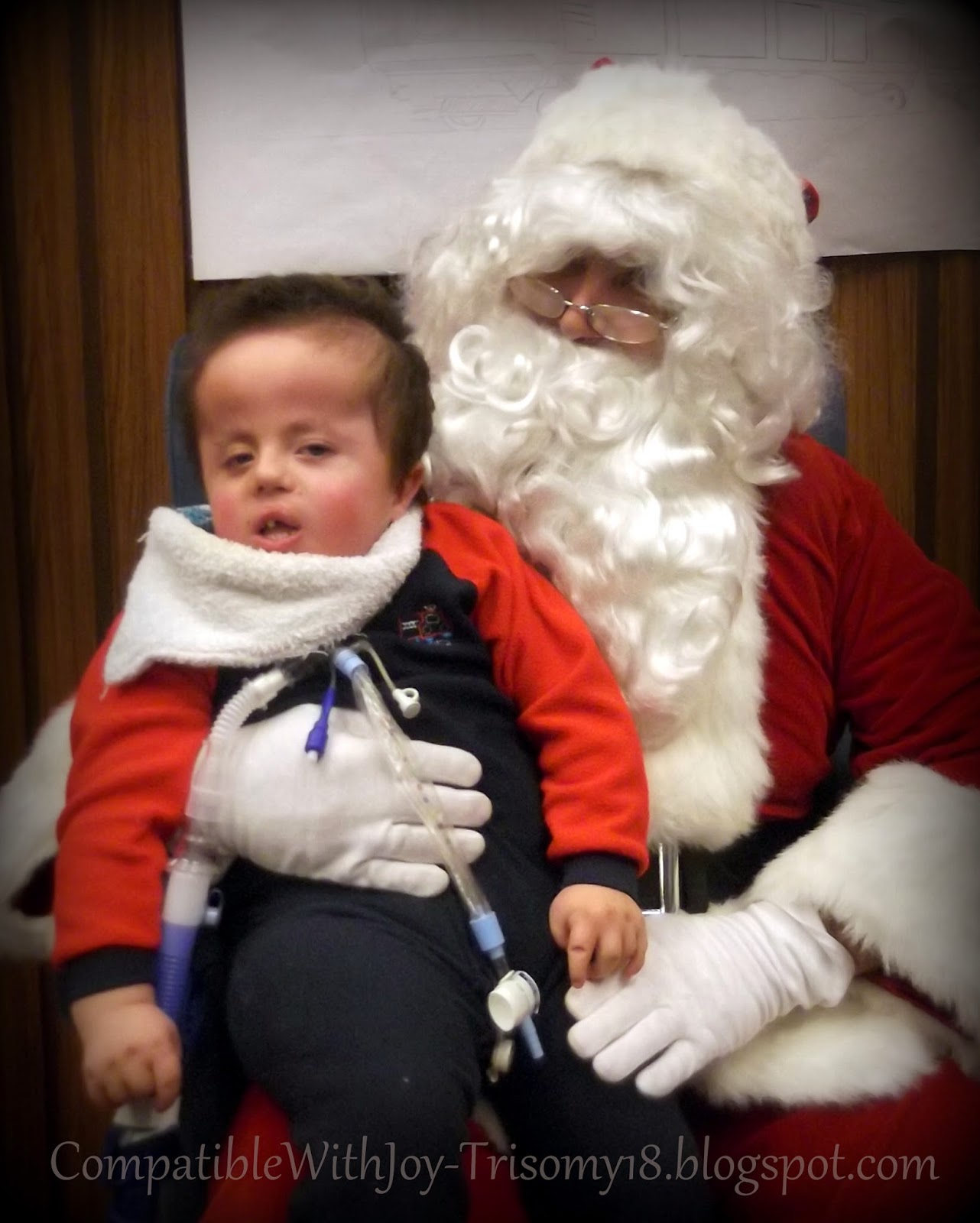 Yes, I realize it's been a while since our last post.  In my defense, Christmas is just one week away, and I need about another two plus weeks to get everything done.  Some things just had to slide, and social media seemed to be the best bet.

But I needed to post a quick update 'cause it seems that Aaron and Santa may have had a talk that I wasn't aware of.  And we could use a few prayers tomorrow.

I don't know if you've noticed, but Aaron has been having more and more "fun" with his trach.  We've had those nasty plugs that seem to come out of nowhere.  I'm thinking it's not a good thing that I'm actually starting to become comfortable with them.  After all, who gets comfy with their child suddenly not being able to breathe!

There was talk of up-sizing his trach.  I hoped (and frankly am still hoping) that we can soon go to an uncuffed trach.  With that in mind, a few friends sent me some uncuffed trachs in the size we're moving to.  That didn't work initially, but I had high hopes of trying again over the Christmas break.

Then there was this last Sunday.  Yeah, the day after Aaron chatted with Santa.  See, his new cuffed trachs have been ordered and are in.  But he didn't have an appointment to get them until mid-January.  His stoma (the actual opening in his neck that it goes through) is too tight to be able to just slip the larger cuffed trach in, so he has to go in and have it dilated, or widened.  And I'm guessing that a new trach must have been on his "must have" list.

Sunday afternoon, I went to do a trach change, just like (literally!) hundreds I've done before.  I mean, I've changed out that trach every 1-3 weeks for over four years now.  So we're talking somewhere in the neighborhood of 200 trach changes.  Some easier than others.  But they've always worked out.

Not this time.  I have no idea what happened, but that trach wasn't going in.  I tried, and tried, and grabbed his back-up smaller trach.  Thank goodness, that one went right in.  So we let him rest a minute, and tried again.  I tried FOUR TIMES! to get that blasted tube in him.  No dice.  It was time to try something else.

See, while the back-up tube does give him a secure airway, he won't ventilate real well on it.  So he couldn't just stay on it long-term.  I put in a call to the local community hospital and they said they could probably help out.  At least I didn't have to haul all the way to Primary Children's.  Ten minutes vs 60 minutes, I'll take that.

In the end, we did get the right trach in, but it took the ER doc, the respiratory therapist and I to do it, and yeah, we SHOVED it in.  It was much harder than it should have been.  Bright and early Monday morning, I was on the phone with our trach whisperer.

The outcome?  We're being slotted in during the lunch hour tomorrow morning to be seen, and to have his (already too narrow for the current trach) stoma widened for his newer, bigger trachs.  I'm a little nervous about the whole thing.  What this kid will do to get what he wants...


I believe in prayer. It's the best way we have to draw strength from heaven. ~Josephine Baker


Posted by CompatibleWithJoy at 10:42 PM