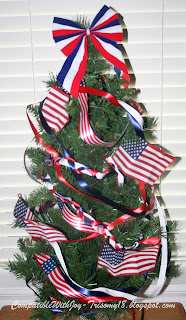 I don't know if there will ever come a day when I don't tear up at the sight of the flag, at the sound of our national anthem.  I think I will forever know the words to all the military fight songs.  Although it wasn't until about five years ago that I realized the Air Force Fight Song doesn't say, "off with one heck of a roar."  I guess the teachers at my grade school on the Air Force Academy didn't think too much of teaching a bunch of 2nd graders to sing "hell of a roar."

This has been a wonderful holiday for us.   My mother-in-law has a saying, "Celebrations -- early, often or late, they're great!"  And so that's what we did.  We started by taking the kids out to their home for fireworks on the 3rd.  It was Aaron's first experience with fireworks.  I wish I was good enough with the camera settings to be able to capture the look on his face.  He loved them!

On Thursday, we played games here at home.  Dad is definitely the monopolist around here, handily winning each game of Monopoly.  The amazing part is, it was Michael who was giving him a run for his money (literally).  Then we went out to Thanksgiving Point for fireworks.  It was Aaron's first time.

Last year, we watched our own firework show as the mountain near us exploded.  I wasn't leaving the house unless we were evacuated.  The year before, he was doing well but had surgeries coming up, and the winter had been really rough.  His first year, well, he'd been home from the NICU for all of five days, and although we didn't know it, was heading back into the hospital in heart failure in less than a week.  Nope, fireworks weren't high on our list of priorities. 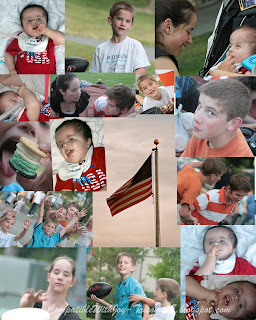 This year though, this year was amazing.  The only thing that would have made it better would have been if Mary and David had been there, too.  But I wouldn't have them doing anything else or anywhere else than where they are, serving others and sharing the love of God with them.

We went early and had a picnic dinner and played games on the lawn.  Again, I wish I was good enough with the camera to capture the looks on faces as we watched, or the fireworks themselves.  There was a neat family sitting near us that brought over a glow stick for Aaron.  Another first.  He loved it!  In fact, as William would shift the way he was holding it, Aaron would change his position and direction of swing as he hit it.  Yep, he's a smarty pants.

The fireworks were accompanied by music, and the first song was "Oh, Say Can You See?"  I love my kids.  They stood without hesitation, proudly saluting the flag that was between us and the rockets.  As I watched and listened, I was reminded of how many, many of our ancestors watched through similar sights, hoping and praying that the flag would still fly, that their loved ones would be safe, but willing to take the chance for freedom.  These freedoms we enjoy, the freedom to live, to work, to worship, to try again and again.  They are priceless, but bought at a very dear price, the blood and sweat and tears of not only our military members, but also their families. 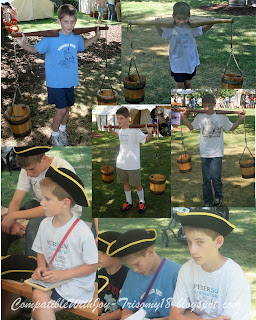 Today, I took the younger five boys to a colonial village.  There they participated in chores and school. And I'm afraid that school was even less exciting to them than usual.  Michael enjoyed it.  The others, well, they thought it was a bit boring.  But none had to wear the dunce cap, so I guess it all worked out.  They hauled water, and I'm guessing that if we had to do that here, I'd even have a bigger fight trying to get them to clean up. 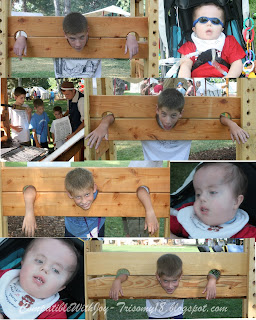 There were some good old-fashioned "time out" spots, but I think they enjoyed it a little more than they would have back then.  Something about being able to get themselves in and out, and no rotten vegetables.  They also spent a little bit of time playing a colonial version of skidoo.  But the uniforms?  The swords and muskets?  Those were a big hit.  All in all, a fun, educational trip. 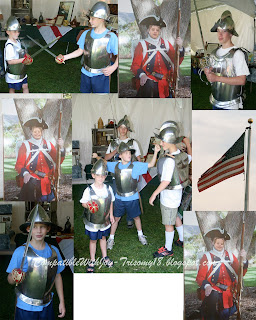 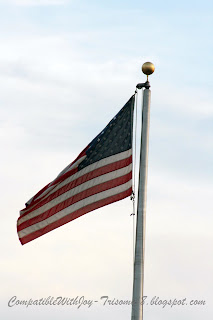 O thus be it ever, when freemen shall stand
Between their loved home and the war's desolation.
Blest with vict'ry and peace, may the Heav'n rescued land
Praise the Power that hath made and preserved us a nation!
Then conquer we must, when our cause it is just,
And this be our motto: "In God is our trust."
And the star-spangled banner in triumph shall wave
O'er the land of the free and the home of the brave!
Posted by CompatibleWithJoy at 9:14 PM