Too Much of a Good Thing, Maybe Not So Good? 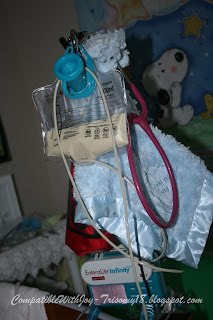 Food, we love it!  Some of us love it too much, right?  And we all know that too much food can be as bad as too little.  Bad for the heart, bad for the lungs, bad for the body.  Well, little (or not so little) Aaron, with his challenges shows us that much quicker than others.  See, his body can't compensate for challenges like ours does.  His heart and lungs are already compromised.  Now, I'm not positive that this is what happened, but the circumstantial evidence is pretty compelling.

Here's what had been the norm until the last six weeks or so, pretty much for the past two years.  Aaron has been on 1-2 liters of oxygen, sometimes even less, when he's well.  He had been tolerating, and even enjoying a few one hour breaks from the ventilator per day.  In other words, breathing completely on his own with supplemental oxygen.  Poops (and yeah, this is a gross but important sign of wellness) have been every day or so, soft, easy to pass.  Not a common thing for kiddos with T18, but that was Aaron's norm.

Early in May, he started fussing right around feeding time, and he would calm down once his food started.  So I figured he was hungry.  I calculated his calories per kilo and he was pretty low.  So I increased his caloric intake and in doing so, his fluid intake.

This was also in the middle of playing games with his PEEP, trying to wean him off.  So when he started having issues, and they came on relatively slowly, I figured it was his heart or his lungs, not a comforting thought.  After all, that's where it showed up.

For the month of June, he's been pretty unstable, at least for him.  There was that oh-so-fun trip with lights and sirens where we were bagging him.  He'd been sick earlier in May with a cold that exacerbated his asthma.  And I wasn't the only one thinking it was his lungs.

He needed more oxygen.  Now we were more often three to four liters, and only occasionally bumping down to two liters when sleeping.  His diapers were less frequent and much firmer, much harder to pass.

When we went in for his three-year-old checkup, he registered about 7% for height but 75% for weight.     I'm not sure those measurements were completely accurate, but with a spread like that, it doesn't really matter.  Either he weighs too much, or he's too short.

So last week, we cut his feeds back to what they were originally.   He continued for several days to struggle, about the same way he had been.  Then on Tuesday of this last week, after several days without pooping, it became obvious that we had to "help" him.  It wasn't going to happen on its own.

Once we did, fabulous things have been happening.  He has returned to his normal stooling pattern.  He can lie flat again without dropping his oxygen saturations.  He has dropped his oxygen needs.  A really good thing because we spent the last week about 1000 feet higher in elevation that he's used to.  By the last day, he was needing more oxygen than usual, but that was expected.  The question was if I was going to be able to support those higher needs.  Yep, we found that wiggle-room.  He's much, much more stable.  And when he breathes easier, so do I.

So it's looking like maybe it was a heart/lung issue like I thought, like was scaring me.  But it was brought on by too much food.  And maybe we can work to reduce his vent settings.  Because that fix, reducing his calorie intake, well that's an easy one.  Which is good news for this mama's heart and breath rate, too.


When the world says, "Give up,"
Hope whispers, "Try it one more time."
~Author Unknown
Posted by CompatibleWithJoy at 8:35 AM