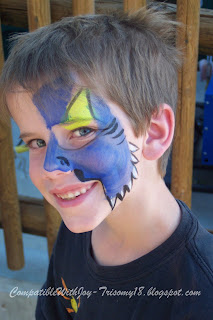 Happy birthday, Michael.  You're seven years old now.  Your birthday was yesterday, but you've been counting down for over a month, and the day finally arrived.  I think you had a good one.  We got to go see Despicable Me, 2 with Hopekids in the morning.  Then we came home and got ready for your party.  You had a backyard full of your friends shooting water guns and lobbing water balls at each other.  Pizza, punch, cake and ice cream rounded out the afternoon.  Last night, you fell asleep listening to Dad read a story, something you've done a lot over the past few years.  Somehow, you just can't seem to keep your eyes open until the end.  There can't be too many better ways for a little boy to drift off than by listening to his dad's voice reading to him. 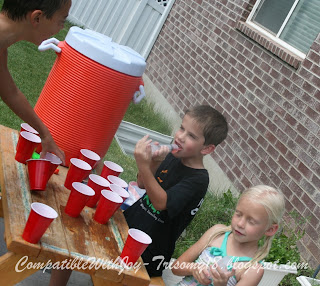 Michael, your childhood has been so different from your siblings.  You're kind of in a strange place.  You're not the youngest, but yet, you are still like the youngest.  There's another one who needs sooooo much more of our physical attention, but you need it, too.  You can't be left on your own, not really, but especially early on, you were often left to entertain yourself.  You are the last one of ours that will play baseball and soccer, that will go to the bus stop on your own and the last one we'll have in the regular public school system.

You were there on that day when we found out that your brother was going to be different.  We had no idea that it was going to be any different than the rest of you, and when I started crying (and couldn't stop), you wanted them to stop hurting Mommy.  You were only 3 1/2, and so concerned for me. 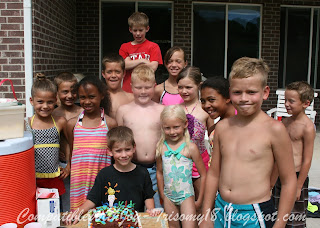 Over the next few months, there were often times when I would tear up, although I saved most of the sobbing for when I was alone.  It was you and me in the house and you would often, any time the urge hit, come running to find me and give me a hug "because you're sad, Mommy."  I'm sorry that I was so sad around you, but so grateful for your compassionate spirit. 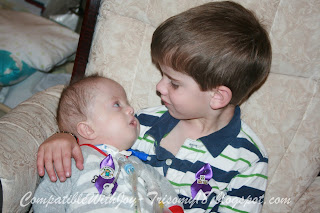 And you've got an immense amount of faith.  Your Sunday teachers thought it was so cute that every time you were asked to pray in class, you always asked that your baby would come home healthy from the hospital.  They had no idea that it was a real act of faith, of trust in God.  They didn't know the odds of that happening.  A year or so ago, there was a baby blessed at church and you asked when we were going to do that for Aaron.  I reminded you that we had done that in the hospital, the day he was born.  You asked me why and I told you that we weren't sure he would ever come home from the hospital, or be strong enough to go to church.  You replied, "I knew he would."  And yes, I think you did.

You're a funny boy, Michael.  You love to run and jump and get into mischief.  You've had more opportunities to do so with so much of my attention being focused on Aaron, but you're also so quick to come play with him or read him stories.  I don't think you really see him as being "different."  He's just your little brother to you.  In fact, when he was tiny, you were sure that you had tubes and wires, too, as an infant, because that's just what babies had.

You're so smart, sometimes a little too smart.  You learned to write your name early.  And you practiced, everywhere, often with blue sharpie.  One time, you wrote your name on the inside of your bedroom door with it.  Then on the outside, you wrote it backwards perfectly, letters and name, as if you could see right through to the writing on the other side.  I wasn't quite sure whether to be impressed or irritated.  I decided on a bit of both. 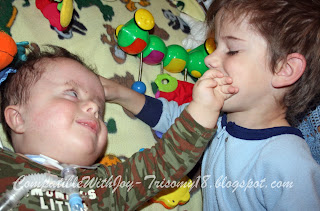 When I told you that you couldn't go on Mary's or David's missions with them because you were going to be baptized at eight and you wouldn't be here, it took about two seconds for you to come up with (in an exasperated tone, like, "duh, Mom) "They baptize people on missions." 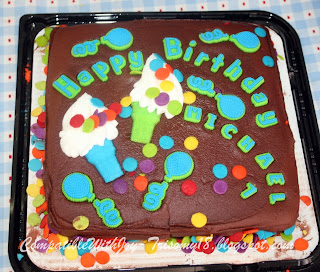 But you also knew before age five about how to read a pulse/ox machine, how to tell whether it was reliable or not, and if the numbers were something to be concerned about.  You could turn oxygen up and down as needed.  You're probably the only kindergartner around that put a "stander" as something a magnet could stick to.  I doubt anyone else even knew what that was!

I love you, Michael.  Seven years old going on 17, trying so hard to be like your big kids.  You're an amazing little boy.


Sometimes being a brother is even better than being a superhero.
– Marc Brown
Posted by CompatibleWithJoy at 8:03 AM