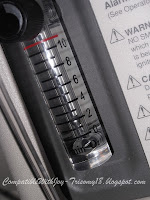 Another quiet, early Sunday morning.  I sit here and listen to Aaron "talking" in his sleep.  I've missed these sounds.  He's been sick this past week.  You know how your throat feels a bit tight and scratchy when you've got a cold.  Well, it is tight, swollen, and his gets that way, too.

I haven't heard any noises from him since last week, just before we switched over to his new ventilator. And changes, well, they always change things.  In the back of my mind was the niggling little concern that his voice might be gone.  I know of another little girl that had this happen.  She just couldn't tolerate the Trilogy, and even when they switched back to the LTV, she didn't vocalize again.

Docs and RTs don't like to make changes when a patient is sick.  It's too hard to tell what is going on.  But we didn't know he was getting sick.  So this week has been full of challenges.  Was it the vent?  Were his settings enough?  (Yeah, that worry's not a new one!)  How sick is he?  Does he need to go in?

I felt pretty comfortable with him here at home.  He has been really high on his oxygen, but I haven't felt that anxiety or even concern that he needed to be seen.  I've felt peace.  A good sign that he was in an okay place.  I've fiddled with his vent settings (with approval from PCMC) to give him more support.  We've watched him like a hawk.  His breathing treatments are frequent, like scheduled every four hours instead of just as needed and at least six hours apart.

But yesterday, I started to see some changes.  Last night, I heard his voice for the first time in a week.  During the night, even awake, the his highest oxygen need was four liters.  Mid-week, that was a sleeping level, and awake was seven.  He's snoozing soundly and sitting about one and a half right now.  Little monkey, when I tried to get video of his noises, he didn't want to do much.  So here's a peek at them, but not much.

So even though we're not in the hospital, he's on a 24-hour watch period.  He has to stay three liters or less for 24 hours before he can go out.  I think we've started the clock.

On another note, I found myself re-reading a book yesterday titled "When Your Friend's Baby Dies".  It's hard, not nearly as hard on you as on your friend, but still hard.  Tomorrow, I will attend another funeral for another child.  Sweet Paxton blessed the lives of so many people.  I am so fortunate to know his mom.  She is an amazing inspiration and I am grateful for her in my life.

I was counting the other day and realized that in my life, I think I've attended six for people at the end of a normal life span.  I've also attended three for teenagers and four for children who have not even reached school age.  Yeah, more for people who are still living with their moms and dads, who've left huge child-sized holes in the lives of those who love them.  See, not only do they miss their child immensely, they're very much used to the day-to-day care of the child, especially in the case of a special needs child.  The hours and hours they physically spend caring for their loved one.  There is nothing and no way to fill that gash in their lives.  But being there, showing that you care, I don't know that it eases the pain, but it shares it.

Please, if you know someone (and chances are that you do!) who has lost a child, yesterday, last year, ten years ago, reach out.  As my friend said at the funeral of her precious daughter "And I will miss you for the rest of my life."  The pain doesn't ever go away, not completely.  I believe it changes, I hope time softens it a little so it doesn't hurt to draw in every breath, but it's never truly gone until parent and child are reunited.

As I listen to the sweet sounds of Aaron from the other room, I cherish them.  I cherish the sounds of my other children, even when they may be a little not so sweet.  They are my flesh, my heart, my life. 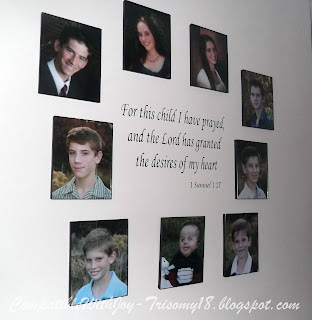 For this child I have prayed,
and the Lord has granted me the desires of my heart.
– 1 Samuel 1:27

Posted by CompatibleWithJoy at 8:52 AM