WARNING:  There may be some triggering parts to this post.  This is a therapy-type post for me and I detail our attempt to extubate 12 years ago that led to him getting his trach.  If it will cause problems, please just know he's doing amazingly well, better that we've seen since before his trach. 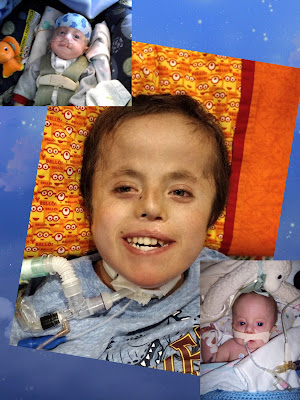 Twelve years ago today was a turning point in our lives.

Aaron had his g-tube/nissen surgery the day before and while that had gone well (mostly, a couple wrinkles) he had been a very difficult intubation and Dr. ENT was concerned about being able to be extubated successfully (meaning pull the breathing tube out and still breathe).   He came in that afternoon and we tried.

Aaron really tried.  But in the less than 10 minutes from when they pulled the tube to when it was back in, he failed spectacularly.   And that time also included bagging him and pushing paralytics.  We don't know what his CO2 was because the machine stops measuring at 130 and that's what it said for him..  Normal range is 24-37.   CO2 influences our pH.  Our bodies are pretty picky.  They like 7.37-7.43.  His was 6.9.  Cell death occurs at 6.8, and I was told (much later) that they often don't get people back from a 6.9.

I discovered that Dr. ENT wasn't sure they would be able to reintubate, so he was prepared to trach him right there at the bedside, but we didn't have to, and we scheduled trach surgery then and there.  He wasn't pushing it.  It was totally our decision.  We sat down after Aaron was stable again and I said, "we need a trach."

He replied, "if you want to keep him, you need a trach."

And that was that.

My parents were teaching in China at the time and as I spoke with them, my dad gently asked, "will you ever be ready to let him go?"

He nodded and gently said, "that's good to know."

But that brings us to today, or this week, or whatever.  The present day.

Aaron had surgery nine days ago to fix a hole between an artery and a vein in his groin area in hopes that it could relieve some of the load on his heart.  I can not believe the difference!

Prior to surgery, in fact for the past few years, we've been accepting sats of 77% or greater.  That one took me a while to wrap my brain around.  We were running 6-8 liters of oxygen just to maintain that.  With the switch to the new vent the end of July, it got a lot better.  We were usually on 2-4 liters and hanging a little higher in the low to mid 80's on his sats.  And his feet were often 10-15 points lower than his hands because of that hole, the pressures in his heart, and the fact that we had widened the PDA (hole between his aorta and pulmonary artery) to relieve some of that pressure.

We have not seen numbers like that since before his trach!!

I have to be honest, I'm almost afraid.  I've learned that often the other shoe is just waiting to drop and I struggle to relax.

But I've also learned to take each moment and live in it and count it for good.

So right now, that's what I'm doing.  I'm grateful for a cardiologist that pushed hard to make this happen, talking to different doctors and specialties to ensure we found the best path forward.  I'm grateful for nurses that take such amazing care of him (and the rest of us).  And I'm grateful for the past 12+ years we've had with this wonderful, silly, crazy boy of ours.

“Be present in all things and thankful for all things.”
― Maya Angelou
Posted by CompatibleWithJoy at 9:38 AM