Best Laid Plans, and All That Jazz... 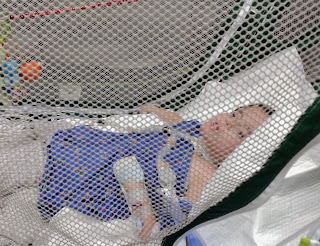 You know that saying, "Man plans and God laughs"?

I think He's enjoying this joke.

Not that He thinks Aaron is a joke, but that I keep expecting things to go according to the way I think they should.

No, we're not quite sure how much longer.

So when his belly became a bully again, that put things on hold for discharge.  Instead, GI was willing to do both a colonoscopy and endoscopy to try to figure it out.  That did entail a "clean-out" (so much fun) and then general anesthesia. The good news is there wasn't anything remarkable in those studies.  That's also the bad news.  Sigh...

Funny story about those studies (at least I found it amusing):

To get to the CPC (Children's Procedure Center) we had to go down the main hall on the main floor of the hospital.  You know, the one that EVERYONE uses if they come to the hospital for ANYTHING.  Well, this kid does not travel light under the best of circumstances.  He has to have a nurse, respiratory therapist (RT) and generally a tech as well.  This day we also had a nurse and RT training as well.  Plus he's in this huge Posy bed (green tent-like thing), has his ventilator, IV pole, and the transport pole that has a suction bag and emergency bag on it.  It's seriously a three-ring circus.  Five adults, plus me, plus all this "stuff" working our way down the hallway.

The looks on people's faces....  Maybe you had to be there.  I found it borderline hilarious.  But hey, that's what we do!

And Aaron?  He was pretty oblivious.  Just hanging out, whacking at his toys.  Moving right along.

So we started a new formula, an elemental formula.  That means the proteins and other nutritional aspects are mostly already broken down so it's easier to digest.  Should work, right?  Maybe...

Started that Thursday night slowly, increased over yesterday, and are now where he should be for full feeds.  Home today, right?

See, last night he started running a fever, and it's responding to Tylenol and not Clonidine.  Clonidine response would mean he was storming and we'd go home anyway.  It's just what we do now.  Tylenol means he's probably got something else going on.  And as much as I am grateful for this hospital and all they do for us, I really, REALLY don't want to go home and then come back.

The only time I've ever cried in the ER was when we came back less than 24 hours after discharge.  Bounce backs are devastating: emotionally, physically, mentally.

In addition, he's also got more diarrhea.  It could be related to his clean-out for the colonoscopy.  It could be a reaction to his new formula.  It could also be a combination of those two AND all the GI meds he's been on because he wasn't "going" before.  I just love puzzles (actually I hate them).

Plus, that nasty ear of his grew out MRSA, so is it responding to the new antibiotic, or not, or....  Who knows.  So ENT is going to come by.

And we've pulled another viral panel.  The good news is that when he came in ten days ago, his viral panel was negative, so if anything comes back positive, we'll know it is a new infection.

You must have long-range goals to keep you from being frustrated by short-range failures.
~Charles C. Noble
Posted by CompatibleWithJoy at 12:41 PM