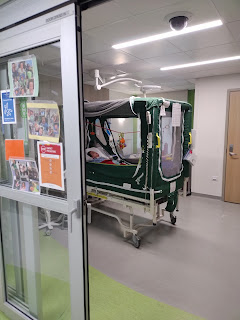 I haven't written because it seems there's not too much to say.

When we got to the hospital, his x-ray was hazier than it has been in the past, but his other labs really didn't show much in the way of anything.  His white blood count was slightly elevated, but only slightly.  That can happen with stress.  Not oxygenating well is something that the body is not too fond of.  Stress anyone? (Good thing they're not measuring mine, right?)

Anyway, the thought is that his pulmonary hypertension has reared its ugly head again.  And by "again" I mean it's worse.  It's not like it's going to go away.  They did an echo which didn't show really any changes, so that's good.  PH can fluctuate, and it can cause a pulmonary hypertensive crisis.  Probably what we were dealing with on Tuesday.

He spent Tuesday night through yesterday on the hospital vent with anywhere from 50-100% oxygen bled through.  Yesterday he was needing about 50% so they attempted to jump to his home vent and it really worked well!  Thank heavens for the new vent.  The old one wouldn't had worked out.  But most of the time yesterday he was on only 2-3 liters of oxygen, you know, where we sit at home normally.

He did have an incident in the early morning hours which brought in RT, rescue meds, and about 12 liters of the good stuff.

In the meantime, he is enjoying seeing all his medical friends up here.  Grateful for blessings, for the time to build these relationships.

“Living in the moment means letting go of the past and not waiting for the future.
It means living your life consciously, aware that each moment you breathe is a gift.”
—Oprah Winfrey 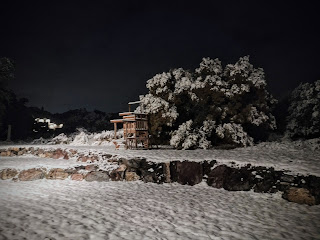 Posted by CompatibleWithJoy at 1:03 PM